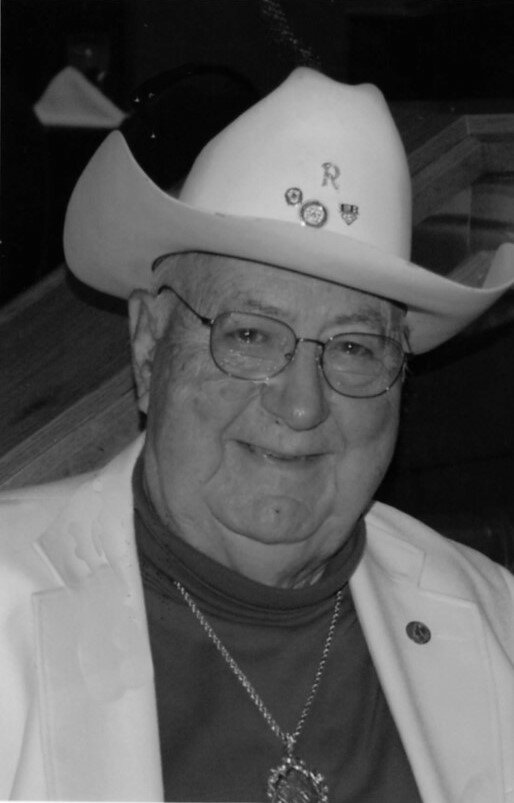 Lee Read was born on a farm near West Salem, Ohio on February 8, 1926 where he lived until he entered the Air Force in 1944.  He attended school at West Salem High School where he graduated and went directly into the Air Force. During his time in the Military, he traveled the United States, starting with Sheppard Field, Texas then to Keesler Field, Mississippi to become an airplane mechanic, then to Gowen Field here in Boise, Idaho.  He was sent to the European Theater and ended up in Germany where he worked on 51- Fighters and helped assemble P- 80 Jets, just arriving from the USA.

He was discharged in July 1946 but spent an additional 5 years in the Air Force Reserves.

During the time in Boise, he worked on B-24 Aircraft and had the good fortune to meet Maxine Moncur on a blind date and she became his wife November 10, 1946.  They lived in West Salem for 4 years before moving to Boise in 1951.

Lee learned the craft of watch repair after being discharged from the service and he tried very hard to satisfy all the customers he met while working at Schubach Jewelry in Boise.

December 7th of 1963, he opened Lee Read Jewelers on Main Street in the Idanha Hotel. After many moves and different locations, Lee and his two sons opened the present location in Meridian, Idaho.  The store has been located there for 21 years.

Lee had many talents from repair, to sales, to playing the organ for the Christmas Season.  He loved his profession dearly and the crowning touch was seeing all his favorite customers and friends while playing the organ at Christmas.

He also enjoyed working with so many nice and talented people who the store employed through the years and he always wished them well on their further endeavors.

Lee was preceded in death by his wife, Maxine, of 60 years and by his second son, Terry, who died an untimely death by falling off a ladder taking down his American Flag after The 4th of July.

Lee also leaves many friends from business and social areas of the Boise Valley and his many friends and acquaintances in the Bayhill Subdivision, along with Kathie Brown who was his companion and helper for many years after his wife Maxine passed.

Lee belonged to the Blue Lodge, El Korah Shrine, El Korah Greeters, the Methodist Church, and BAA of Boise State, as well as other groups through the years.

He enjoyed many sports such as boating, waterskiing, basketball, football at the Stadium, and enjoyed seeing the growth of Boise State plus the great times snowmobiling and boating at the cabin at Donnelly.

Lee expressed a great appreciation to Donna and Rose with Serenity Home Care, and Keystone Hospice for their care over the last year.

In lieu of flowers, a donation to your favorite charity would be appreciated.

To send flowers to the family or plant a tree in memory of Lee Read, please visit Tribute Store
Monday
7
November

Share Your Memory of
Lee
Upload Your Memory View All Memories
Be the first to upload a memory!
Share A Memory
Send Flowers