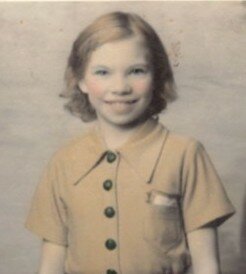 Floy Geneva 'Wilson" Rexroad was born in Glenn's Ferry April 10th, 1928, to Thomas Clark and Geneva Lulu Layton Wilson. They moved to Boise when Floy was small, and Tom began to work at Consolidated Freightways. When Floy was 5, she contracted polio. The Boise specialist that she was taken to advised strapping her to the bed for 6 months as a cure. A friend from Meridian heard of "Sister's Kenney's Method of Massage." Every morning her father would massage her with "absorbing oil," which burned but worked to help Floy with her polio allowing her to go on to live a full life full of athletics, travel and love.

Floy rode and broke ponies and horses. She was always top in athletics in grade school and went on to excel in music and played clarinet in band. Floy graduated from Meridian High School in 1946.

Floy married Leon H Rexroad in Boise on January 12th, 1951. Leon went to work for the Idaho Power Company on mobile. They lived in Boise their first year of marriage and welcomed their first daughter Judith Kay December 1951 at St. Al's Boise. Eventually, Floy and Judi moved to American Falls, Blackfoot, Pocatello, and Vale to travel with Leon. Floy moved back to Boise with Judi until Leon took a permanent position in Hailey in early 1953. Floy and Leon welcomed their 2nd child Thomas Leon in May 1953 and had their last child Debra Floy in July 1956 in Sun Valley.

After Debra was born, the family moved to Caldwell and settled on Canyon Hill for 5 years. Floy was an active mother and participated in their children's activities including Brownie Leaders, Cub Scouts and as a PTA officer. The family moved to Boise and moved into the house where Leon and Floy would live for the next 39 years. Once she moved to Boise, Floy volunteered at "Sam's" store on State St. for Good Samaritan Volunteers. She also volunteered at Boise Museums and had antique shops at Pioneer building.

Leon retired from the Power Company, and they went onto buy a 5th wheeler to travel with. They spent their retirement years boating, catching lots of salmon and traveling south in the winter. They enjoyed their travels making friends wherever they went.

Per her request, she asks instead of flowers to please make donations to charity of your choice. Graveside Services will be held at 1 PM on October 7th at Meridian Cemetery.

To send flowers to the family or plant a tree in memory of Floy Rexroad, please visit Tribute Store
Friday
7
October

Share Your Memory of
Floy
Upload Your Memory View All Memories
Be the first to upload a memory!
Share A Memory
Send Flowers