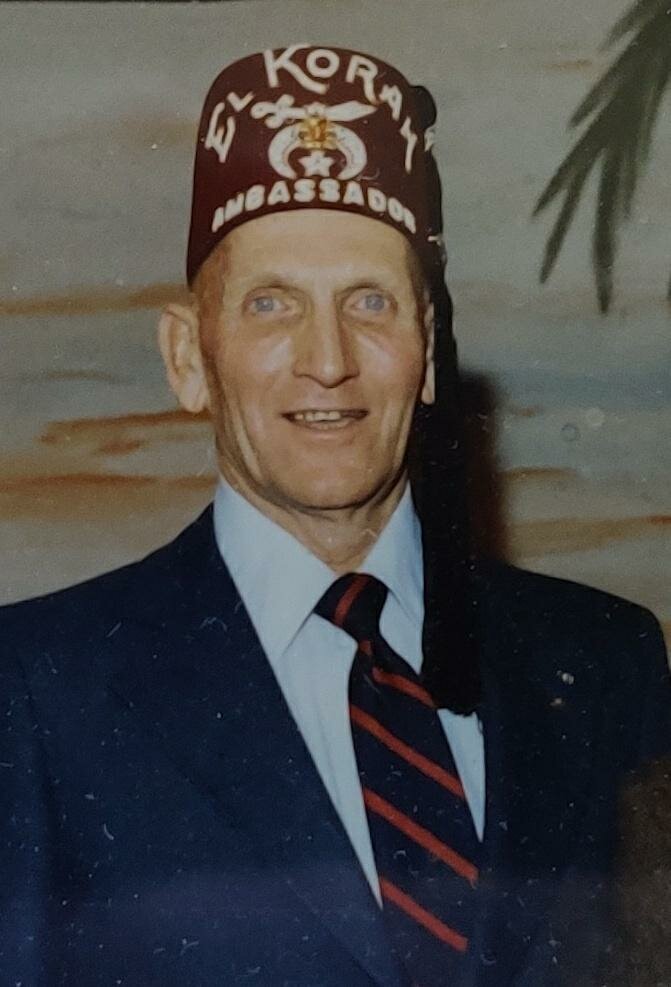 William V. “Bill” McClung was born on July 15, 1928, in to Pearl M. (Schulpke) and Ellery George McClung.  When Bill was only a few months old the family moved to Chicago, Illinois.  From there the young family moved west to Lompoc, California, then south to Los Angeles, California, where Bill was educated.  He played football and baseball prior to graduating from in January, 1947.  He was captain of the Marine League champion football team of 1946.

He married his high school sweetheart Vera Wilford in February, 1948.  There were two daughters born to this union: Linda Carol in December, 1948 and Carolyn Ann in October, 1951.  The couple was divorced in 1955.

Bill worked in the construction trade all of his life.  He had his own construction company at one time and obtained his general building contractor’s license in 1953.  He worked on building crews at Edwards Air Force Base in the early 50s, as well as Kaiser Silver Mine.

He was a life long member of the Christian Church, although not always a regular attendee.  In 1955 while attending Crenshaw Christian Church in , he met Maureen Cullen.  They married at that church on October 27th, 1956.  Bill continued in the construction business until March, 1960, when the couple decided to move to to farm in rural .  That endeavor lasted three years, then Bill returned to the building business.

In 1961 son William Cullen was born, followed in 1963 by Pamela Maureen and in 1966 by Thomas Ellery.  The family lived in for over 40 years.  During that time Bill became the Building Official for , where he consolidated all the cities of the county into one building department.  He served the county for more than 20 years, retiring in December, 1992.  He then went to work for a waste management company as a project manager for the building of waste stations in the area.

As for hobbies, Bill enjoyed doing carpentry work and was good at it.  He could build or repair just about anything.  He built three of his homes: the one in , the one in Burley and the one in ; he also extensively remodeled the house in Paul during the 28 years they lived there.  He acquired a 1929 Model A Special Coupe in 1992 and completely restored it.  It was a challenge that he thoroughly enjoyed.  When he moved to , he joined the Treasure Valley Model A Club.  He also did the gardening and yard work.

Bill served on the South Central Health District Board as the representative from .  He was also very active in the International Conference of Building Officials (ICBO) for 20 years.  He served the local Idaho chapter as president.  He served on ICBO’s national committee for small jurisdictions.  He attended the national conferences for 18 years.

Bill joined the Elks Lodge in Burley in 1966, subsequently transferring his membership to Rupert Lodge #2106.  Bill joined Paul Lodge #77 A.F. & A.M. in 1970.  He progressed through the York Rite Bodies and became a member of El Korah Shrine in 1974.  He also was a Scottish Rite Mason.  He was a Chapter Dad of the Mt. Harrison Chapter, Order of DeMolay for 10 years; served as secretary-treasurer of the Burley-Rupert Shrine Club for several years before moving to .  He served as an Ambassador of El Korah Shrine in the and was active in the Players unit of El Korah for several years.  He held the Shrine and its members in high esteem.

Bill and Maureen traveled to his Building Officials national conferences for several years.  They also enjoyed going to for major league baseball spring training games.  They took their grandsons Nathen and Morgen with them, one at a time to begin with, then took them both on a trip to The Arches in southern , in and the , which had a ground blizzard that day!  Bill and Maureen went to in 2000 and to in 2003 where son Bill was living and working at the time.  Bill’s highlight of that trip was going across the English Channel to , to visit the World War II museums there.  One other trip was not as successful: their trip to in 2006.  Bill slipped on the concrete walk, broke his hip and had hip replacement surgery there in .

The family would like to thank all the staff at Brookdale Assisted Living on Parkcenter and especially the caring staff at The Terraces at Harris Ranch.  A Celebration of Life will be held Saturday, August 20th from 1pm to 4pm at the El Korah Shrine – Tiger Room (1118 W. Idaho Street, Boise).  In lieu of flowers, donations may be made to Shrine Hospitals for Children, c/o El Korah Shrine, Boise, Idaho.

To send flowers to the family or plant a tree in memory of William McClung, please visit Tribute Store