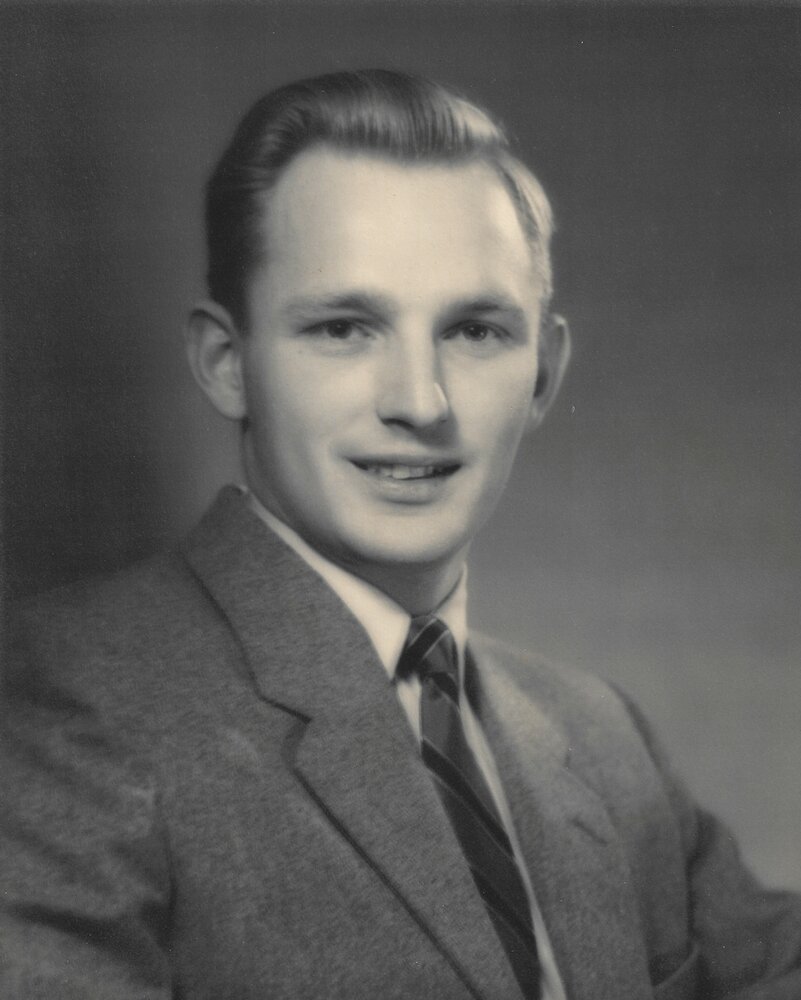 Loren was born in Tampico, Mexico on February 28, 1930, the eldest of three sons of Helen Herr of Calmar, Iowa, and Loren Frederick Kahle of Oklahoma City, Oklahoma. His father was working for an affiliate of Exxon Petroleum in Mexico. In 1935, Loren’s father was transferred to Venezuela with Creole Petroleum Corporation, and the family lived in eastern Venezuela in an oil camp. It was there as a child that Loren met his future wife Elizabeth Knebel (“Betty”). They were in the same grade in the company’s one-room schoolhouse for the first through the eighth grades.

After Loren’s father was transferred to the United States, he graduated from Central High School in Tulsa, Oklahoma, earning the rank of Eagle Scout along the way. He graduated from Cornell University in 1951 with a master’s degree in mechanical engineering as part of their first five-year engineering program. He was a member of the Tau Beta Pi engineering honor society, Chi Psi fraternity, and the Cornell swim team. After graduating from Cornell, Loren began working at Exxon’s refinery in Bayway, New Jersey. He earned an M.B.A. at night school at Rutgers University.

Loren and Betty married on June 20, 1953, in Scarsdale, New York. In 1954 they moved to Maracaibo, Venezuela, where, following in his father’s footsteps, Loren worked for Creole Petroleum Corporation. Their three sons were born in Maracaibo. Following a 1961 transfer to the United States and a brief stint in Bronxville, New York, the family moved in 1964 to Sumatra, Indonesia, and in 1965 to Djakarta, Indonesia. They lived in Djakarta at a time of political violence and upheaval and the overthrow of the Indonesian president Sukarno, necessitating the October 1965 evacuation of Betty and their three boys to the States. Loren remained in Djakarta for another eight months before his transfer to Exxon's New York office.

The family settled in Bronxville, where Loren was a Scoutmaster for Troop 1, one of the earliest Boy Scout troops in the United States, and an active member of the PTA. He enjoyed cross-country camping trips with his family, highlighted by sampling the local hamburgers and shakes wherever they ventured. In 1986 he retired from Exxon, and he and Betty moved to Austin, Texas to be near family. In Austin, Loren was active with the newly formed Austin Opera and was a member of the Knights of the Symphony. For twenty-five years, Betty and Loren enjoyed spending summer and fall in Sun Valley, Idaho, where they shared many happy occasions with their sons and their families. In 2019, they moved full-time to Boise, enjoying the opportunity to see longtime Sun Valley friends amidst the scenery and climate they loved.

Loren will be remembered as an athlete, whether on the golf course, ski slopes, or in the swimming pool. Most of all, he will be remembered for his sweet temperament, intellectual curiosity, love of classical music, and endearing ability to sneak a cookie before the main meal. His grandchildren will cherish the times they shared a sweet treat with him.

Loren is predeceased by his parents, his brother Robert Vinton Kahle, and his niece Alison Lurton Kahle. Loren is survived by his wife Betty, his three sons, Randolph Stuart Kahle, Charles Frederick Kahle (Carrie), and James Allan Kahle (Mary), and their families, including seven grandchildren (Nissa and Nowell, Emma and Ben, and Charles, Heidi, and Kenny) and two great-grandchildren (Harrison and Rowan). He is also survived by his brother Richard Allan Kahle, nephew Brewster Kahle, and niece and nephews Kim Kahle Lasaster, Steve Kahle, and Chris Kahle.

To send flowers to the family or plant a tree in memory of Loren Kahle, Jr., please visit Tribute Store

Share Your Memory of
Loren
Upload Your Memory View All Memories
Be the first to upload a memory!
Share A Memory
Send Flowers