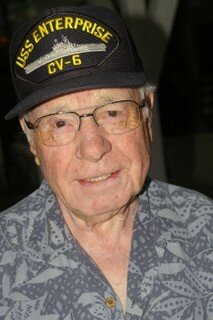 Hal was born on June 23, 1921 to Carlos and Ethyl England in Burley, Idaho, the youngest of three children.

He grew up in the depression era in Burley. As a teenager he shoveled snow for local businesses to earn as much as 25 cents for the family. He also sold newspapers on the street corner to help his family

While in high school, he worked at the National Hotel as a bell boy. He said, “He got a real good education there”.

During his high school years, he played a saxophone in the band and played on the football team as a blocking back. At 119 pounds, he said people thought he would get squashed, but he was to quick.

Hal spent two years in the Navy during World War II stationed on the USS Enterprise CV6 from 1944 to 1946. He lived thru many kamikaze and bombing attacks while in the Pacific. Some causing extensive damage to the ship and killing several of his crew mates. He said that is where he learned the meaning of “Freedom is Not Free”.

He worked at Idaho Creamery for a while right after the war in Twin Falls and later Idaho Falls selling frozen food and ice cream. The neighborhood kids thought he was the greatest because he often had ice cream samples.

Hal spent 30 years as a salesman for Intermountain Surgical Supply in Boise. He traveled throughout Southern Idaho and was well known and highly respected in the medical community. After leaving Intermountain, he spent another 10 years as the Materials Manager at the Caldwell Hospital until retirement at age 66.

He was married to Vyrna Vallette and they had four children. She passed away. He then married Mary Lou Bates Mann. They blended their families and spent 56 years together.

He loved golf, learning the game in the late 1940s from his older sister, Melba. He played well into his 80s.

Hal and Mary Lou spent the happiest times of their marriage at Terrace Lakes, playing golf and developing special friendships. They commuted daily for over 20 years working in Boise and Caldwell. In 2006, they moved back to Boise.

Hal enjoyed 56 years as a Mason and Shriner, having fun raising money for the Shriners Hospitals for Children.

A Memorial Service and Celebration of Life will be held at Summers Funeral Home, 3629 E Ustick Rd, Meridian, Idaho at 11 AM on June 23, 2022. A reception will follow at the El Korah Shrine, 1118 W Idaho St, Boise, Idaho from 1 to 3 PM. In lieu of flowers, please make donations in Hal's name to the El Korah Shrine for the benefit of the Shriners Hospitals for Children.

To send flowers to the family or plant a tree in memory of R. England, please visit Tribute Store
Thursday
23
June

Share Your Memory of
R.
Upload Your Memory View All Memories
Be the first to upload a memory!
Share A Memory
Send Flowers