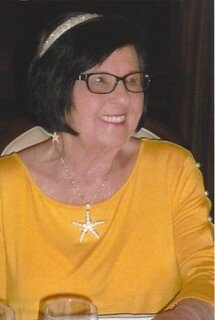 Madeline was born in Detroit, Michigan 93 years ago, the first child of William and Marion Orr. Fast forward to high school where she met Arvan.    After graduation two years later, and with her husband to be home from the Air Force, they married. Their marriage continued for 75 years.

A year later, Marlene, the first of 6 daughters was born. The following year, Alan came along. During the next 21 years, Madeline's motherly workload grew with the addition of Karen, Melodie, Lynnar, Robin, and Julie. From her bevy of 7 children there sprang a total of 18 grandchildren, 25 great grands and 3 great great grands.

But Madeline still found time to enjoy her favorite activities such as ice skating, swimming, badminton, and western dancing. She also won  a dress making contest at Knotts Berry Farm and  served as a volunteer 5 years at a local hospital.

Thirty-three cruises in the Caribbean helped her unwind.

During these years the family bought their first home in Southfield, Michigan. After 15 years they moved to Anaheim, California. Then, 15 years later they built their 7-acre Spanish ranch on a Temecula, California hilltop. The moving came to an end 18 years later at Boise, Idaho with Robin, Karen and Alan.

Madeline was the perfect role model. She loved the Lord and had no vices. She had a born-again family.

To send flowers to the family or plant a tree in memory of Madeline Kent, please visit Tribute Store
Wednesday
15
June

Share Your Memory of
Madeline
Upload Your Memory View All Memories
Be the first to upload a memory!
Share A Memory
Send Flowers