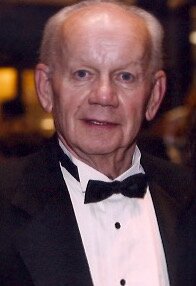 Thomas McNeil Beck was born to Stella and Edward Beck, on March 17, 1939, and passed away on May 15, 2022, peacefully in his home with his beloved wife and dog at his side.

Tom was raised alongside 5 siblings on a dry farm near Rexburg, Idaho where he worked the fields with his older brother Bob and his siblings, riding horses, driving tractors, and caring for the land. As a child, Tom was known for his love of playing in the dirt and watching things grow, a love that followed him his whole life. He shared his passion for horses with his father, with whom he participated in carriage races nearly every weekend in his childhood.

Tom and his family moved to Shelley, Idaho before his high school years, where he played football until attending Idaho State University on a football scholarship and later transferring to Utah State University where he met his future wife, Marilyn. Tom and Marilyn married in 1961 shortly after completing their undergraduate education. The two then moved to New Orleans for Tom’s years at Tulane Medical School where he studied Hematology and Oncology.

Following medical school, Tom completed his internship in Hanover, New Hampshire before moving to Germany for three years with his family to complete his drafted military service in the Army, serving as a battalion surgeon near the East German border.

Tom and Marilyn moved from Germany to Salt Lake City, Utah with their two sons Scott and Christopher, and welcomed their daughter Jennifer shortly after. Tom completed his residency and fellowship at the University of Utah.

Dr. Tom Beck and his family then relocated to Boise, Idaho in 1975. He was instrumental in creating the Mountain States Tumor Institute, now St. Luke’s Cancer Institute, the only medical research facility in the state, providing Idaho’s only dedicated hemophilia center and pediatric oncology services in conjunction with St Luke’s Children’s Hospital. He served as medical director for two decades. Under his leadership, MSTI grew to serve patients with sites throughout Southern Idaho. With his expertise in oncology spanning over 35 years, Tom touched the lives of so many patients, families, and fellow physicians, leaving an extraordinary legacy when he retired at the age of 73.

Just as he had his whole life, Tom spent his retired years living with an emphatic ambition and determination until his last moments. With an incredible sense of adventure, Tom and Marilyn traveled the world together, frequently inviting their children and grandchildren along for the adventures which included trips to nearly every continent on Earth, and even in his final days, Tom was planning a trip to Antarctica with his daughter.

Tom and Marilyn shared their love of travel, appreciation of the arts, and the joy of gathering their loved ones at every opportunity. One of these great traditions included an annual family fly-fishing trip to Montana where he hosted a weekend full of laughter, beautiful scenery, and lifelong memories. Even in his absence, this tradition will live on, with an empty seat in the boat for Tom and a cold beer in his cup holder.

When not on an international adventure, Tom spent his days at his beloved Delgaty Ranch in Bellevue, Idaho with his wife, family, dear friend Carlos and loyal companion Leo. Even in his final years, Tom was still digging in the dirt, tending to his horses, and watching his crops, wildflowers, and grandchildren grow. Tom always told his family that the ranch was a magical place. While true, we are convinced that this magic he spoke of came from Tom himself.

Tom had an incredible gift for appreciating the beauty in things and moments often overlooked by others, collecting pieces of his life and adventures which he incorporated into his artwork. He never missed the details, in his life and the lives of those he loved, Tom commemorated the most beautiful moments with his incredible talent and unmatched creativity.

Tom was an extraordinary leader, father, husband, sibling, grandfather, and friend to all who knew him. He is loved dearly and will be missed fiercely. Setting a powerful example for those he leaves behind, Tom lived his life with a profound passion and joy that we all strive for. Despite our best effort, Tom is a man who cannot be captured in words but will live on in the memories of those who love him, as we live our lives by his great example.

Tom was preceded in his passing by his parents, Stella and Edward Beck; his brothers, Robert and Charles Beck; and is survived by his wife, Marilyn Beck; his children, Scott Beck, Christopher Beck, and Jennifer Carroll; and his grandchildren Thomas and Kathryn Beck; and Olivia and Conor Carroll.

To honor his life and his passions, we humbly request that in lieu of flowers or gifts, those who wish to, can make a donation to the Thomas M. Beck Patient Assistance Fund at St. Luke’s Cancer Institute, or another charity of their choosing.

This donation can be made via the following link, which includes the option to select the Thomas M. Beck Patient Assistance Fund in the drop down menu.

Alternatively, for those who wish to mail their donation, please send it to

All mailed donations received in his memory will be directed to the proper fund accordingly.

A celebration of his life will be held in the Atrium of the Center for Visual Arts, Boise State  at 1110 S Capital Blvd, on Saturday, June 4th  from 3 to 5 o’clock PM.

To send flowers to the family or plant a tree in memory of Thomas Beck, please visit Tribute Store
Saturday
4
June