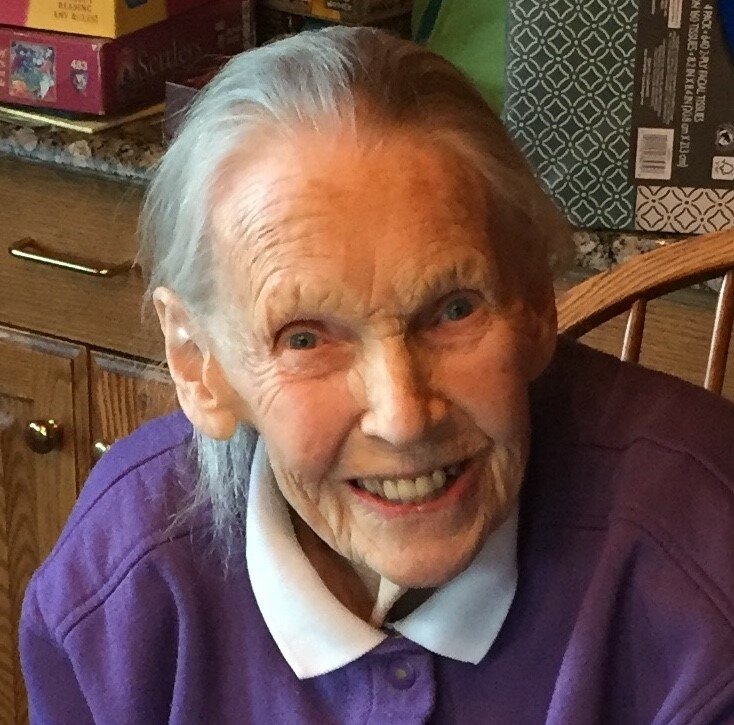 “All the world’s a stage, and all the men and women merely players.

They have their exits and their entrances; and each one plays many parts.”

June Duncan made her entrance onto this world’s stage in Southport, England on June 29, 1926. Her first role was as the youngest daughter of James “Jimmy” and Olive Duncan. Her twin Antony lived only three days. Because of the lingering impacts of gas Jimmy was exposed to in France in World War I, he was forced to limit the pace of his work as a chartered accountant. This allowed him to spend more time with June than he had with his other three children. Jimmy took June to nearly every film that came to town. She also attended many of Southport Little Theatre’s amateur productions where her siblings – Ronnie, Peggy and Ken – were involved.

June attended Brighthelmston School, a short walk from her home where she made new friends, challenged and delighted the school mistresses, played sports, and acted in plays. She also loved attending services at the local church with her parents. As a teenager, June imagined a future as a professional actress, a vicar’s wife or both. Before completing her formal schooling, she corresponded with several professional actors and one – Robert Donat – consistently responded. Following his advice, at age 16, in 1942, she began work as an unpaid stage manager with a repertory company in Rhyl, Wales. After three months, the company started paying June two pounds a week. Soon, she was supporting herself as an actress.

For 13 years, she performed in over 100 plays with repertory companies in Keighly, Peterborough, Sheffield and Southport in England; in Edinburgh, Glasgow and Aberdeen in Scotland; and in Durban and Johannesburg in South Africa. She also performed with ENSA (Entertainment National Service Assoc. – Britain’s USO). She played many leading roles, but her favorite was the title role in George Bernard Shaw’s St. Joan. After seeing her performance in Edinburgh in 1949, Shaw’s publisher was so impressed he cabled the aging playwright that he had found his “roaring lioness.” This is how Shaw had described the ideal depiction of his most iconic character.

In July 1955, during her second tour in South Africa, June met Orval Hansen from Idaho Falls, Idaho. He had been a Rotary scholar at London School of Economics after graduating from law school and was touring Africa and Europe before beginning his career. After just two weeks, Orval proposed. The two corresponded for weeks as they each traveled separate paths back to England. She accepted when they were reunited. They were married on December 31, 1955 and set sail for the U.S. two weeks later.

After Orval showed June Washington, D.C., New York, Boston and Chicago, they arrived at their new home: Idaho Falls. Orval practiced law and served in the Idaho Legislature, and over the next 11 years the couple had seven children. June was active at St. John’s Episcopal Church, the Daughters of the British Empire and many other local organizations and causes.

She was cast in a community production of My Fair Lady, but her favorite performances were as Orval’s most effective campaigner. She helped him run successfully for the Idaho Legislature five times, and then on to win a seat in the U.S. Congress in 1968 and be re-elected twice.

After Christmas, 1968, with seven children in tow ranging in age from 12 years to 10 months, June and Orval moved to Arlington, Virginia. June became active in St. Andrew’s Episcopal Church and was among its first women lay readers. She started the St. Andrew’s Players – which puts on performances to this day. She was also active with the Congressional spouses and an endless number of school and community programs that included her children.

In 1972, June returned to professional acting at Washington, D.C.’s Arena Stage and performed for the next 33 years in many theaters including the Kennedy Center. She was nominated for a Helen Hayes Award (D.C.’s version of the Tonys) several times, winning for her performance in India Ink in 2000.

In the 1990s, June and Orval built a cabin on the Salmon River in Stanley and began spending summers in Idaho. In 2014, they permanently relocated to Boise and June became part of St. Stephen’s Episcopal Church family, serving as a lay reader. Her beloved Orval passed away in 2017, after nearly 62 years of marriage. For the next four years, June received and appreciated loving support from her family and many friends, old and new.

June took her final curtain call at her home surrounded by family as the sun set on April 28, 2022.

June loved to meet new people. She was interested in everyone and sparkled as she heard their stories and told a few of her own. She stayed in touch with friends and loved writing and receiving letters. Her collection of letters fills dozens of boxes. She never used a computer and was baffled by new technology, but enjoyed long chats on the phone with people who could not be with her in person. She was thrilled when she could still read the lesson at church (thanks to YouTube) during the pandemic.

June lives on in the lives of her seven children and their spouses: Margaret, Elizabeth (Mark), Jim (Joan), Katherine (Elaine), John (Terry), Mary, and Sara (John); her 12 grandchildren Chris (Kerry), Matthew, Rebecca, Samantha, Harrison, Kenny, Grace, Alex, Austin, Shaun, Caleb and Hannah; and her great granddaughter Mackenzie Skye. And she lives on in the lives of all her friends, which seem as numerous as the stars. Because of the many ways June touched our lives, we all shine a little brighter on the world’s stage.

A memorial service and celebration of June’s life will be held at 1pm on Saturday, May 21, 2022 at Holy Nativity Episcopal Church, 828 W. Cherry Lane, Meridian, ID 83642. In lieu of flowers, please consider a gift to a local theater in June’s name.

To send flowers to the family or plant a tree in memory of June Hansen, please visit Tribute Store
Saturday
21
May

Memorial Service and Celebration of Life

Share Your Memory of
June
Upload Your Memory View All Memories
Be the first to upload a memory!
Share A Memory
Send Flowers