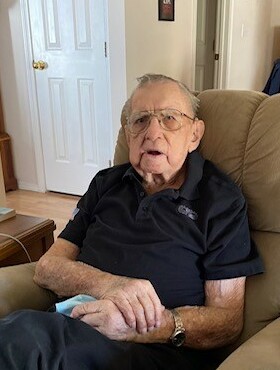 George was born at the home of his grandmother, Lucy Shafer, in Caldwell, Idaho on May 3, 1924.  The second of three sons to George H and Annie L (Shafer) Jones.

He grew up on a farm in the Kuna area, attending school at Poplar Grove and then in the Kuna school system.  His childhood was much like Tom Sawyer.  Swimming and exploring along Indian Creek, playing with many neighbors that were close to the boys ages.   From that experience a love for football was developed, which he played in high school and continued the love of the sport the rest of his life.

After the war broke out, he quit school and joined the Army to participate in parachute training in Georgia.  Sustaining an injury on a practice jump he was then transferred to a regular Infantry Division.    In 1943 his unit landed in Hawaii for additional training.   In 1944 he, along with 200 other Mortar trained men were attached to the Navy and participated in the landings at Leyte and Luzon in the Philippines and Okinawa.  His unit participated in the occupation of Japan.

After the war he returned home and went to work for The Idaho First National Bank.   He married Faye Dilkes from Boise, Idaho.  This marriage gave them two children, Dennis Jones (Nampa) and Cheryl Jones Tolman (Pocatello).  This employment took them from Boise to Weiser to Wallace and then onto Pocatello.  They were later divorced.

In 1966 George married the love of his life, Jacquelin (Jackie) R. Hamlett.  This marriage brought a stepson, R D “Bud” Hamlett and stepdaughter, Roba Johnson.   They moved to Boise, Idaho where he worked in the bank’s administrative office as Manager of Purchasing.  At age 55 he left the Bank and after a short career in home building, he reentered the banking business as Sr. V.P. & Cashier of the Idaho State Bank in Glenns Perry.  George and Jackie loved living in Glenns Ferry and both said it was their happiest time.  During this time, they adopted a child, Russell George Jones.  They enjoyed time spent in Lowman area with their family.  At age 65 George tried to retire with little success so he reentered the work force as a contract courier for Pony Express and later Western Air.  He loved the drive to Twin Falls and back and the many people he was in contact with.

After 37 wonderful years his world fell apart with the loss of his beloved Jackie.  He stayed busy with work, visiting Lowman and attending the Boise Bronco football games.   In 2006 he met Shirley Law whom also enjoyed football.  A year or so later, he moved in with Shirley and they called this “Assisted Living”.   Shirley brought 5 wonderful girls to this relationship.  They were able to travel to places such as;  Washington D.C., Grand Canyon, Alaska, Honolulu and New Zealand, just to name a few.  The Trip to Washington DC was with an Honor Flight of 25 WWII Veterans.  They saw the WWII memorial and was honored for their services.  The Honor Flight of Idaho had a wreath to be placed on the tomb of the unknown soldier.  George was one of four that participated in the ceremony.

The flag that George received was given to Kuna High School.   George never finished high school due to going into the war so when the flag was presented to the high school they turned around and presented him with an honorary diploma.  This same class also asked him to walk with them on graduation day, 2013.  It only took him 71 years, but he did it.

George was preceded in death by his parents, is wife and his two brothers, Jack (Octavia), Wichita, KS and Wayne (Barbara), Garden City, ID.

Per Georges request, there will be no service.  Cremation completed at Summers Funeral Home, Meridian.  George and his wife, Jackie will be buried in Glenns Ferry at a later date this summer.

Until we meet again.  Love you

To send flowers to the family or plant a tree in memory of George Jones, please visit Tribute Store