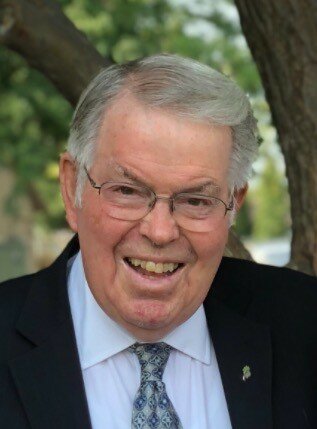 Please click on the link below to view the services:

Hal LaVell Johnson passed away, peacefully, on April 2, 2022. He was born in Provo, Utah on May 15, 1935 to LaVell Franklin and Marjorie Luzella Johnson. His father was a music teacher and band director. To supplement his income, his father bought a 10-acre fruit farm as well as others of smaller size in Emery County and surrounding areas. Needless to say, Hal grew up learning to work helping his father irrigate the orchard, harvest the fruit, stack the hay and feed the farm animals. He learned at an early age “to do everything right.” He attended junior high and high school in Ferron and Manti, and loved playing the trombone and marching in the bands his father directed.

Hal graduated from South Emery High School in 1953, attended Carbon Junior College in Price for two years and graduated from Brigham Young University in 1958 with a Bachelor of Science Degree in Psychology and Speech Therapy. In 1960 he fulfilled a  two-year mission for The Church of Jesus Christ of Latter-day Saints and loved serving in the Eastern States Mission where the church had its beginning. A highlight he talked about was performing in the Hill Cumorah Pageant.

While completing a Master’s Degree in Education, Hal met Andrea Pulley from American Fork, Utah. They were married August 16,1968 in the Manti Temple. In his own words, “it was wonderful!” Their first home was located between the fruit orchards in Orem, Utah. Hal taught special education at Springville Junior High School then moved to Wasatch County where he was the director of Special Education programs serving the school districts of Heber City, Midway, Park City, North and South Summit.

In 1974, Hal and Andrea made their home in American Fork where Hal was employed by the Utah Division of Rehabilitation Services. He worked for the next 36 years as a vocational rehabilitation counselor. As hard as Hal worked at the office, he worked even harder at home creating a beautiful park-like space from the 1.5 acre piece of ground Andrea’s parents gifted to them. He spent many happy hours providing a beautiful garden retreat for their four children: Brandon, Heather, Shae and Tara. In his later years, he enjoyed being with his 14 grandchildren - Evie, Claire, Maeve, Avery, Lincoln, Hunter, Tanner, Aiden, Brooklyn, Caitlin, Daxton, Tess, Gwen and Tate - when they played in the beautiful yard he lovingly created.

It wasn’t all work at the Johnson home. Hal made sure there was family camping and fishing where they enjoyed the beautiful outdoors together. Hal particularly loved taking his children to the beautiful mountains, rivers and lakes he had explored in his childhood. His children loved those trips and the stories he told of his youth.

Hal served faithfully in many church callings, including scouting and in various priesthood quorums. One of his memorable church experiences was serving as a counselor in a bishopric at Brigham Young University. In addition to Sunday worship, he and Andrea attended weekly activities with the students who they came to love. Another joy Hal found was serving in the Mount Timpanogos Temple for ten years.

After moving to Boise, Idaho in 2014, Hal and Andrea were called to serve a mission to the Family and Church Headquarters Mission in Salt Lake City. They served long hours, helping patrons search their family history and explore the Family History Center. They loved their association with the other couples and young elder missionaries.

Hal has served faithfully and worked tirelessly all of his life. This can be attested to by all who worked with him and served with him. We know he will continue his work on the other side. He is preceded in death by his mother Marjorie Johnson, his father LaVell Johnson, his sister Claris Nelson, brother-in-law Dennis Nelson and his many aunts, uncles and cousins. He is survived by his wife Andrea Johnson, and his children Brandon Johnson (Lisa), Heather Ruesch (David), Shae Johnson (Beth), and Tara Nielsen (David) and his fourteen precious grandchildren. Also, he is survived by his brothers Kregg and Cameron Johnson, and sisters Kathy Larson and Zeneth Orawiec.

Services are under the direction of Summers Funeral Home and will be held Saturday, April 16, 2022 at The Church of Jesus Christ of Latter-day Saints, Liberty Ward, 2300 East Bergeson Street, Boise, Idaho. Visitation will begin at 10:00 AM followed by the funeral at 11:30 AM. To watch services online, please follow the link in the obituary at www.summersfuneral.com. He will be interred at 11:00 AM on Monday, April 18th in the Manti, Utah Cemetery.

To send flowers to the family or plant a tree in memory of Hal Johnson, please visit Tribute Store
Saturday
16
April

Share Your Memory of
Hal
Upload Your Memory View All Memories
Be the first to upload a memory!
Share A Memory
Send Flowers