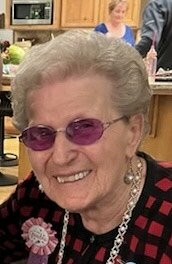 Martha (Marge) Ottilie Schrank passed away peacefully at her home on Wednesday, March 16, 2022 in Boise, Idaho.

She was born in the village of Oberwerrn, Germany on September 27, 1932, the third of six children of Johann and Ottilia Schindelmann. Two of her brothers died in the Second World War. In her early 20s Martha worked as a hospital candy striper. It was during her daily walks back home that she caught the eye of handsome American Army soldier Melvin Schrank. His German was limited and her English was non-existent, but that did not stop them from falling in love. They were married within a year on May 15, 1954, in Germany.

Melvin was scheduled for an honorable discharge in November 1954 and needed to get his bride back to the United States. In August, he made arrangements to send her, all alone, to the plains of South Dakota to live with his parents and work on the family farm. Melvin asked his parents to pick up their new and never-before-seen daughter-in-law at the train station, telling them she would be wearing a green coat and carrying a red suitcase. But upon arrival Martha immediately identified them: “His father looked just like Mel!”

Mel came three months later and soon Martha was being called Marge – thanks to Mel having had an old girlfriend of the same name! She was obviously OK with the change, as she went by Marge the rest of her life. On the farm she learned English and how to drive, both a car and a tractor. She became a US citizen in 1957.

After a few years of marriage and farm life in Corsica, South Dakota, Mel and Marge moved to Sioux Falls to start their careers and their family. We loved hearing her tell stories of her many jobs. Working at a Pepsi-Cola plant, she sat in a chair watching pop bottles whizz by. At Nabisco, she was tasked with looking out for broken cookies before packaging. She described it like the classic scene from “I Love Lucy” – an apron-wearing Marge at the cookie factory devouring the baked goods as the conveyor belt flew them along.

In 1972, the family moved to Idaho and it was here Marge was introduced to her love of camping and the mountains. Mel and Marge spent almost every weekend camping and cutting firewood for their winter heat.  After retirement they would take their motorhome on cross-country trips, always making stops in Colorado to see her daughter Tammy's family and Minnesota to spend time with Mel’s brother and sister-in-law, Lee and Sandy. In later years, the motorhome would stay put in Cascade, Idaho, where they would spend their summers with friends.

In Mel’s final years she lovingly devoted herself to caring for him so he did not have to move to a care facility. Sadly, Mel passed away in August 2020. Marge loved her family, loved being a good friend to all, and would do anything for anybody. We will miss her greatly.

To send flowers to the family or plant a tree in memory of Martha (Marge) Ottilie Schrank, please visit Tribute Store
Wednesday
23
March

Share Your Memory of
Martha (Marge)
Upload Your Memory View All Memories
Be the first to upload a memory!
Share A Memory
Send Flowers