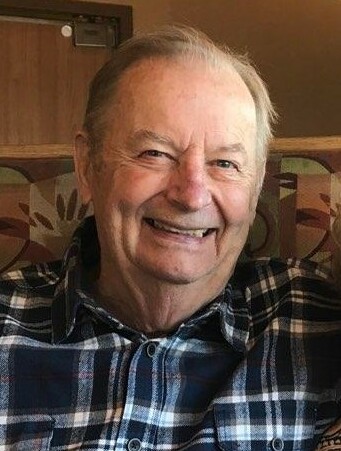 Boise, ID - Timothy James “OʼNeill” Hogland, age 83, passed away on February 12, 2022 from dementia. Tim was born on April 26, 1938 in Washington, D.C., oldest son of Ruth Wheatley and Ennis Hogland, followed by brother, Michael, and sister, Sue. Per Sue, “my mother always loved him best.” As a youngster, Tim and family lived in many places following his Momʼs employment. His favorite home was Anderson Ranch Dam where he spent a wonderful year “roaming free.” His treehouse stands to this day! During their time in Pasco, Washington, Ruth met and married Jim Humbird in 1955. Adding two beloved sisters to Timʼs family, Andrea (Andy) and Michelle (Mickey). Tim had fond memories of hunting and fishing with Jim as well. He graduated from Pasco High School and attended Boise
Junior College.

In 1958, Tim joined the Army. He trained at Fort Carson, Fort Monmouth, and Redstone Arsenal Missile School. Tim met and married Winifred Lacy in 1961. He served three years in Germany working on the Nike Missile and always remembered his time fondly.

After discharge from the service, he joined Value Engineering in 1962 in Washington, D.C. Longing for the Northwest, he and Winnie returned to Boise in1972, where they raised, trained and showed Arabian horses. He started working for the City of Boise. Tim started as an inspector for Code Compliance and became the Director of Building, Planning, and Community Development in 1975. Tim retired in 2004 after 32 years working for his beloved City of Boise - and serving under five Mayors. Tim was also active in the community serving on several national and local boards and committees. Tim wasproud to contribute to Boiseʼs growth, working along side treasured and passionate colleagues.

In 1985, Tim married Constance Guthrie Werner and became a beloved stepfather to her three children and ultimately, seven grandchildren. Tim was a proud Godfather to Emerald and Peter. He and Connie spent 36 wonderful years traveling the world, spending time with their family and close friends, and enjoying their cabin in McCall. Tim was an active outdoorsman. Weekends were spent either riding his motorcycle or sailing the “Maude Mae” on Payette Lake. He climbed Rainier, Borah and the Beartooth Mountains. Tim came from a close family and loved celebrating birthdays and holidays with all of them.

Tim is preceded in death by his parents, Great Aunt, Maude Mae, brother, Michael , and brother-in-law David Stout. He is survived by wife, Connie; sister Sue Smith and her husband, Bob of Boise and their children Duane, David, Lisa and Ragen Moura and her husband, Jeff and children, Jordan and Addison; Andy Humbird Stout of Chalis, ID and her daughter Kathy Ann; and Michelle Oleson and husband John of Gleneden Beach, OR. He is also survived by stepchildren Michael F. Estess of Spokane, his children Emily and Michael Peter; Mark H. Estess of Boise and his children Natalie, Alexander and Carolyn; and Gretchen Ratzlaff and her husband Bruce of Portland and their children Sarah and Ryan.

No service will be held but a celebration of life will happen this summer in McCall. In lieu of flowers, donations may be made to Boiseʼs Rescue Mission, Salvation Army, or the charity of your choice. We hope you will remember Tim as a caring, patient, generous, fun-loving man who would give the shirt off his back to help someone in need. We were truly blessed to have him in our lives and strive to live up to his example. Happy sailing, Tippy - and may the wind always be at your back!

To send flowers to the family or plant a tree in memory of Timothy Hogland, please visit Tribute Store

Share Your Memory of
Timothy
Upload Your Memory View All Memories
Be the first to upload a memory!
Share A Memory
Send Flowers