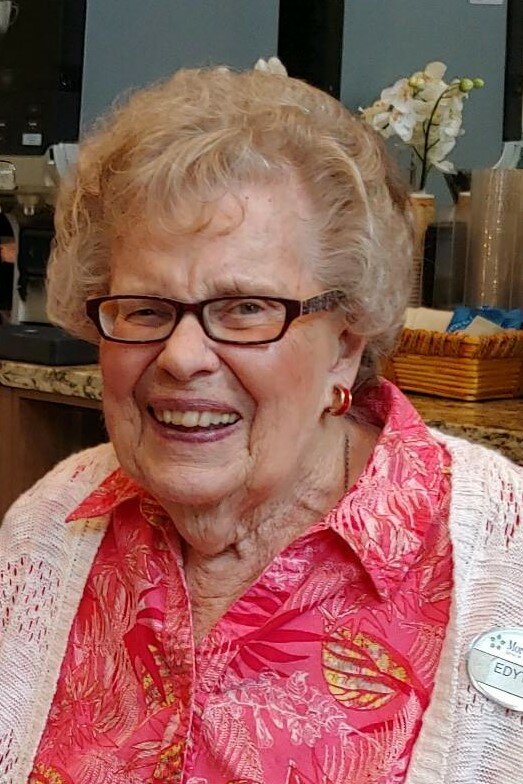 Edythe L. Grossaint, 89, passed away on September 27, 2021. She is now at peace, freed from the pain she lived with for many years and together once again with the love of her life.

Edy, as she was known by her friends, was born March 9, 1932 in McCall, Idaho to Calvin Dorsey and Frances M. Borton Dorsey.  She had an older brother by 4 years, Calvin Raymond Dorsey, who passed away in 1988 from kidney disease.  Mom’s family lived in McCall until she was 6 years old, then they moved to Boise.  The first year in Boise, her father was unemployed, but he made her a doll house for Christmas that she always cherished. She attended Garfield and Cole Elementary, North Junior High and graduated from Boise High School in 1950.  Until the last few years when they couldn’t get together due to the pandemic, going to lunch with her high school girl friends was always something she looked forward to.

Edy met the love of her life in 1948 when Earl Thomas Grossaint came home from leave from the Marines.  His mother and two brothers lived across the street from them.  When he was discharged from the Marine Corp in 1949, they got engaged and were married August 19, 1950.  1950 was an eventful year for her.  Mom turned 18 on March 9th, graduated in June, got married August 19th and left for Kansas City, MO in September.  Dad used his GI bill to attend trade school to study architecture and became a draftsman.  When Mom became pregnant, they moved back to Boise where they raised their 3 sons, MiCal, Rick and Marshall “Dee”.  Mom and Dad were both romantics.  Going through her things, we found a napkin from their wedding, that Dad had written a love note on with their engagement and wedding dates.  She also kept many love letters, napkins with messages and cards he had written her over the years.   Dad and Mom were married for 66 years before he passed on Jan 22, 2017.  Mom was heartbroken and it took her quite a while to come to grips with living life without her soulmate.  On July 26, 2020, Mom lost her youngest son, Dee to MS.  It was a loss that she never got over.

Looking back over the years, they had moved a lot.  They moved 5 times while living in McCall in the early 1960’s for 3 years. Every time, Dad moved Mom’s piano.  During their married life they lived in 3 different homes in Boise. In 1984, they moved to Anchorage, Alaska for 3 years, while the building market was booming.  After returning from Alaska, they enjoyed traveling and bought a motor home. They went on many outings with Mom’s brother and sister-in-law, Calvin & June.  They started with a small motor home, went to a big one, and then at last ended up with a small one again.  When driving the motor home became a chore, they became “snowbirds” and bought a winter home in Lake Havasu, AZ.  They later downsized to a condo there that they loved.  In 2013, they decided that they could no longer maintain a home in Arizona and Idaho and decided to sell both homes and move into an Independent living community in Boise.  In 2015, they later moved to Morning Star Independent Living where they both lived until their passing.

For the most part, Mom was the homemaker; however, over the course of her many years, she did do product displays in grocery stores, several bookkeeping jobs, primarily at Valley Glass, and some property management.  The family remembers her wonderful cooking and canning.  She also could iron a shirt better than any commercial place.  Matter of fact, Dad bought her a commercial presser.

Mom loved music.  In the early years, she played the piano and later the organ.  She had an organ in both Lake Havasu and Boise.  She always enjoyed going to musical performances such as the Philharmonic and Broadway shows.   Going to the theater was also a joy.  While in Lake Havasu, she volunteered at the local performing arts center.

Volunteering was a big part of her later years.  She volunteered in the gift shops at St Al’s Hospital in Boise and the Community Hospital in Lake Havasu.  She loved playing cards.  She played bridge and pinocle for years. She was known for saying “the cards were terrible.”  More recently, she found BINGO and that was her game.  She always seemed to have a purse full of nickels or quarters.  Matter of fact, doctor appointments were scheduled around BINGO.  Mom kept her mind alert doing crossword puzzles ever since everyone can remember, and it was a morning ritual.

Mom cherished her family the most.  It meant so much to her when the family could be together. She so much enjoyed time with the great-grandchildren.  Mom will be dearly missed by many friends; her two surviving sons and wives, MiCal & Elyse Grossaint and Rick & Elaine Grossaint, and daughter-in-law, Candy Grossaint; her 3 Grandchildren, Celena Auger and husband Paul, Melissa Larson and husband Kristopher, and Dallas Grossaint; and her 4 Great-Grandchildren, Baylee Auger, Trevor Auger, Ashley Larson, and Riley Larson.  She was blessed to have most of her family all close living in the Treasure Valley.

A celebration of life will be held at Summers Funeral Home, 3629 E Ustick Rd, Chapel in Meridian, on Monday, October 25, 2021 at 11:00am followed by an interment at the Idaho Veterans Cemetery in Boise at 1:00pm.  All is welcome.

To send flowers to the family or plant a tree in memory of Edythe Grossaint, please visit Tribute Store
Monday
25
October

Share Your Memory of
Edythe
Upload Your Memory View All Memories
Be the first to upload a memory!
Share A Memory
Send Flowers