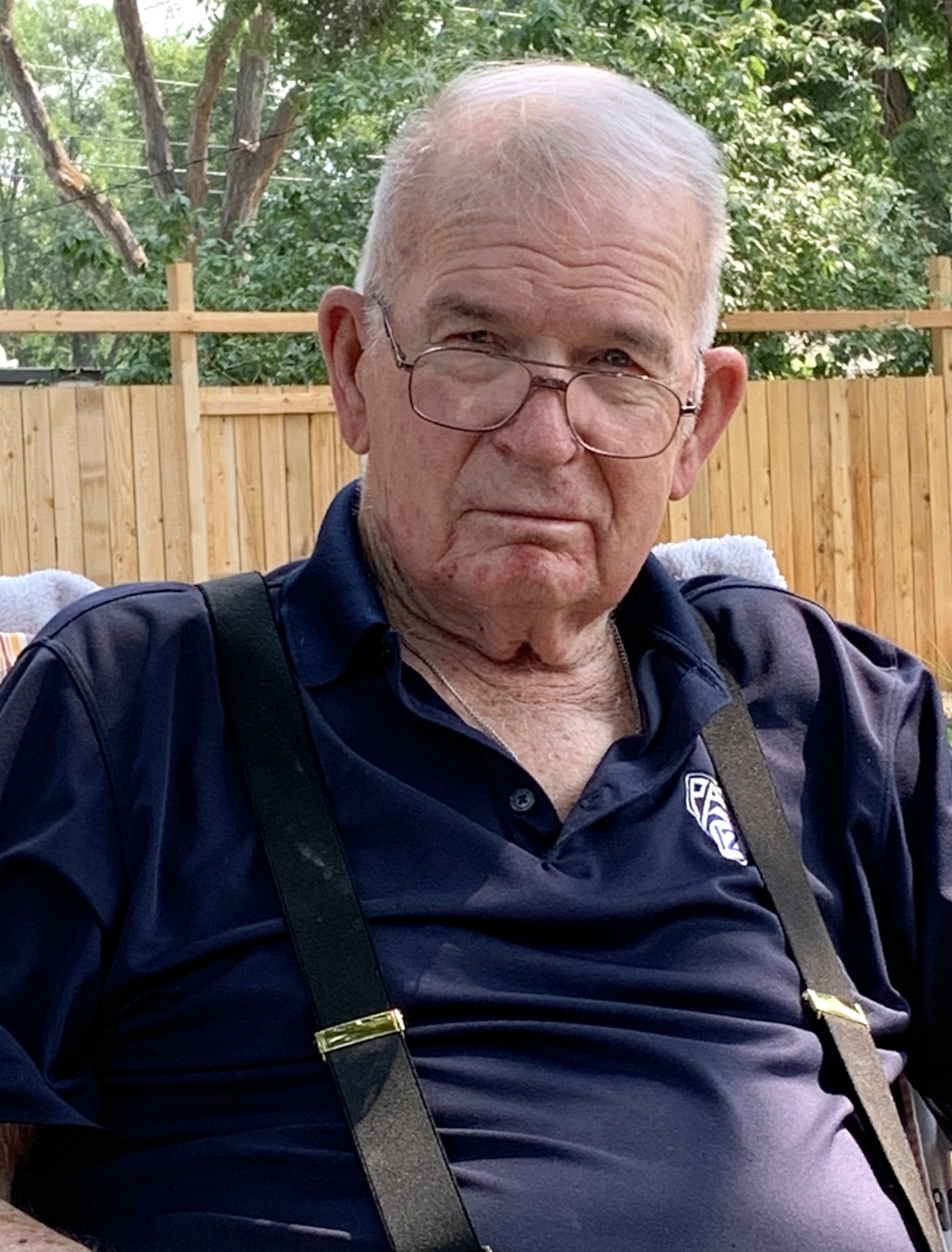 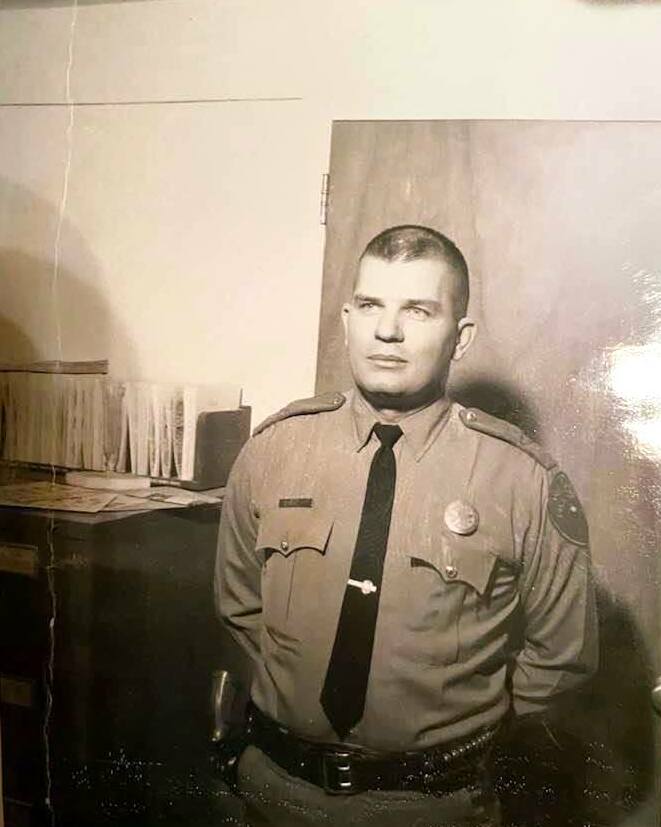 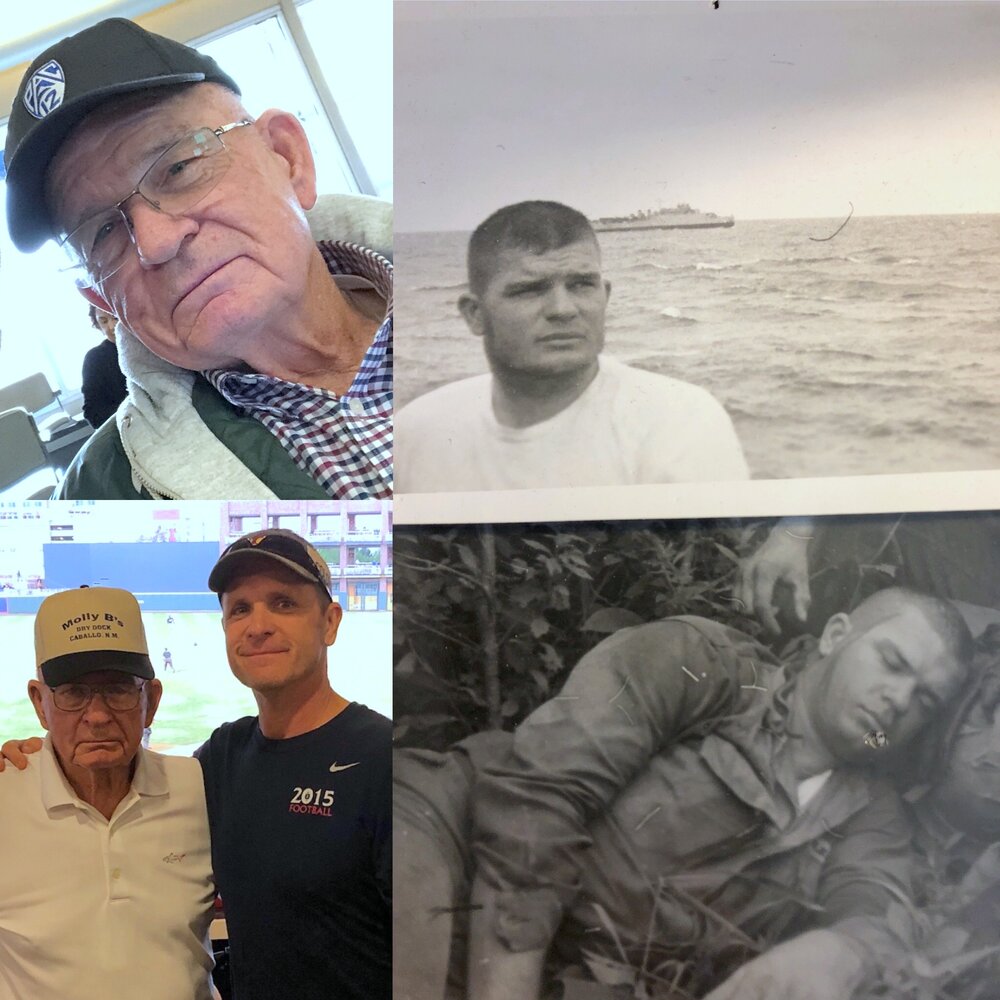 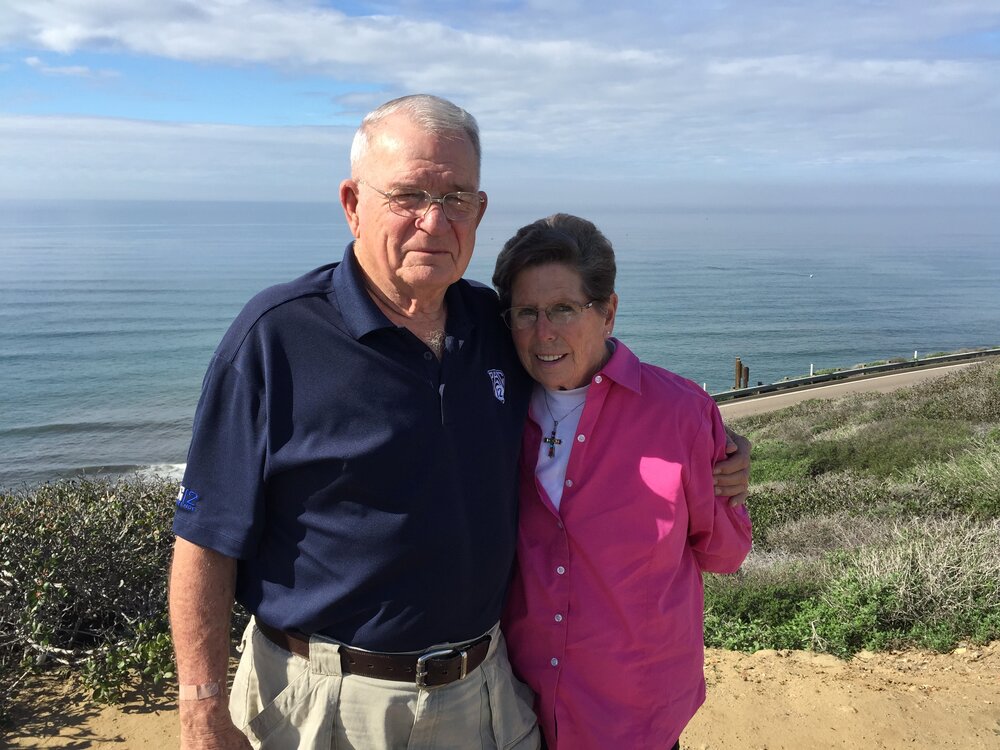 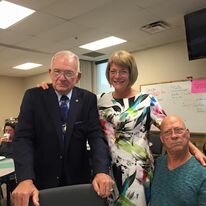 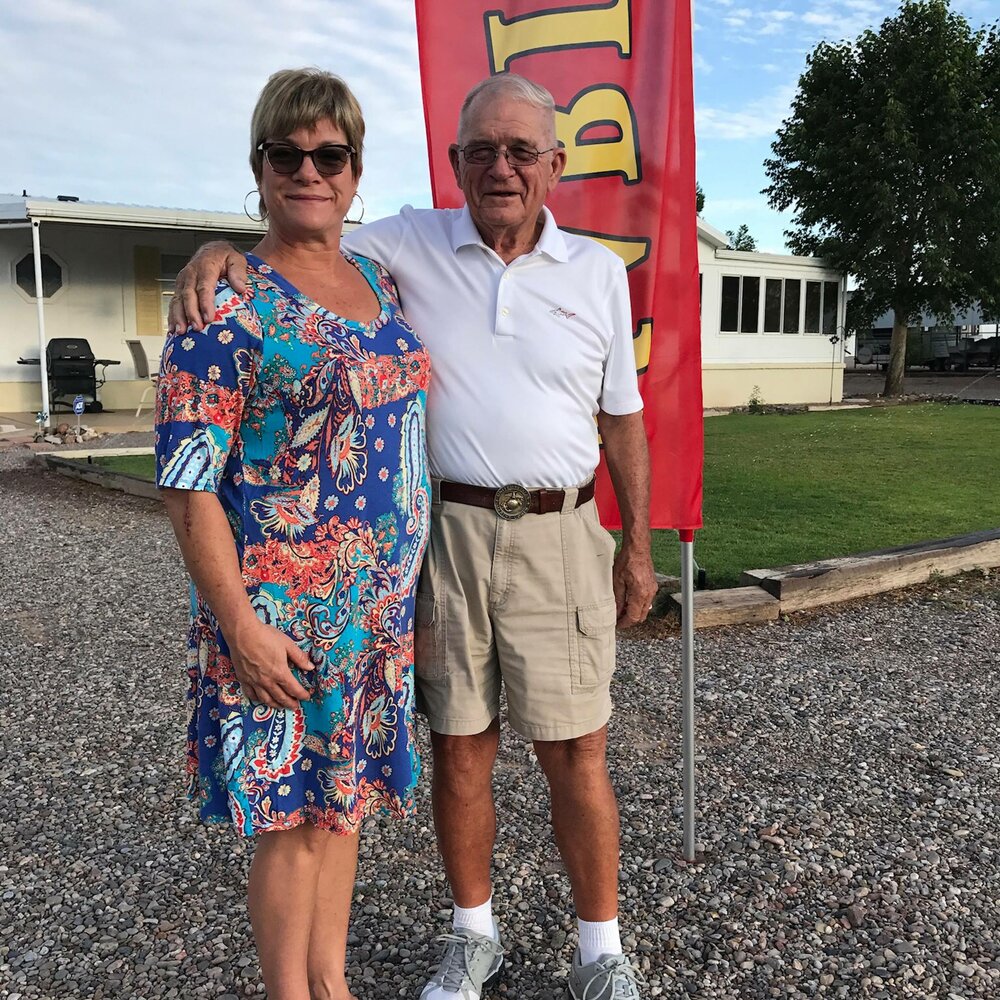 William Eugene Robinson was born in Anchor/Angleton TX on November 27, 1939 to Clayton Pleze and Faye McDaniel Robinson.  Bill passed peacefully at home alongside family members where he entered into the presence of our Heavenly Father and joined those who preceded him in death, Father Clayton, Mother Faye, Sisters Joy Hart & Wanda Rackard .   Bill is survived by his Sister Peggy Baty, Brother Clayton "Butch" Robinson, Daughter Darcel Grounds, Son Brad Robinson, Step Daughters Jean Machuga, Kathy Weber, Step Sons Steve Cochran his wife Teresa and Jeff Cochran.  Dad and Molly had many grandchildren and great grandchildren and touched all of their lives.

Billy Gene (Grandma named him Billy Gene and the Doctor changed the name on the birth certificate, hence his multiple aliases) was raised in WEST TEXAS and attended Ector High School where he starred in football.   Bill played football for Texas Western College  (UTEP) for several years in the late 50s, lettering two times while playing offensive Guard and “I was the heaviest guard at the time at 205 pounds” was his tagline over the past 10 years.

Bill eventually graduated from the University of Texas El Paso in the mid-70s.  Between his first and 2nd enrollment stint at Texas Western/ UTEP Bill joined the United States Marine Corp.

Bill enlisted and served in the Marine Corp from August 1962 through August 1967 (in the Reserves in 1959) and earned a National Defense Service Medal and the Good Conduct Medal.  Bill is best remembered as a Drill Instructor at MCRD San Diego.  Bill also served in the Military Police where he also studied Map & Aerial Photo Reading, but the majority of Bill’s service was at MCRD in San Diego where he trained Marines to prepare them for their tours in Vietnam.  Bill has actively communicated and participated with a UTAH group where many of the Marine Veterans have expressed their gratitude to Bill for his dedication to Service and Training and that Bill ‘flat out saved their lives while in combat’. . Val Potter shared Bill has a special gift of “Making Marines”

Bill Robinson also served 20 years in the U.S. Marine Corps Reserves and retired with the rank of CW04 in December 1993.  He served his country with pride!

Bill then joined law enforcement full-time with the DPS/ Texas State Police after “ he mustured out of the Marine Corp” Big Springs news article 1967. Bill's lifelong friends came from his time at Texas Western, the Marines and in law enforcement with the likes of his first partner Kenneth Maxwell. There were many others he kept in touch with until he passed away.  Bill played football with Bill Worley in Odessa TX and both men joined the Marines then ran around in law enforcement (Worley with Border Patrol).  His friends were very special to Bill and there were too many to mention, but each had a special place in his life.

Bill worked for the State in other capacities and eventually began a successful New York Life career.  Dad retired in 1993 to “go fishing” in Caballo NM.

Bill and Molly a.k.a. “Cochran owned and operated a Boat/RV storage business, Molly B’s Dry Dock. Many customers and friends would stop by to visit Bill and Molly daily.  Bill and Molly LOVED and gave back to their community in so many ways.  They took many of their own grandchildren and children in the local community to church camp every summer.  Bill and Molly bought many 4H animals for charity and donated to the many programs in their beloved community.  The list of contributions that they made is long and the heart that they had in their service was beyond measure.  They loved their grandkids and then onto the joy of holding the great granddaughters and great-grandson in June.    Bill loved holding those babies.

Bill was a leader and served in several appointed and volunteer capacities like Probate Judge and CASA advocate.  See note below from his CASA supervisor:

“…  Your dad was an amazing man and your mom was a wonderful woman also.  The two of them worked on CASA cases together at times.  Your dad was a commanding force when it came to advocating for abused/neglected children in the foster care system.  He worked diligently and insured his notes, interviews with those involved and information he shared in court was accurate and fact based.  Being in court and sometimes having a position opposite of what most others thought was in "the best interest of the child", can be intimidating but your dad was a force to be reckoned with when it came to the best interest of those less fortunate.  He stood up for what was best for those children, never faltering and holding strong to his recommendations.

I admired your dad and I was honored to have him on our team in Sierra County.

As well as being a force to be reckoned with, he also had a twinkle in his eye and a great sense of humor.  I remained friends with him on facebook for quite a few years after moving back to Oregon.  He was a great man.

Molly and Bill took their Alaska Bucket list trip in mid June of 2018.  On June 17, 2018 Molly suffered a life ending brain hemorrhage and passed on June 18th.    Bill who loved Molly deeply was truly never the same as many family and friends had noticed and shared.  Molly was not just his wife, but Bill’s best friend.

Bill was looked up to and called “Dad” and or “Grandpa” by many young people who were able to look at him as DAD and Grandfather regardless of the genetic DNA.

Bill and Molly were active in their church and had a strong faith and love for Christ.  Bill and Molly were called to serve and serve they did!  They served their local churches, the local community and gave to countless charitable organizations throughout the world.   Bill and Molly understood the responsibility to give back ☺

Molly and Bill gave back!!

Bill navigated his business and daily life without Molly for 1 ½ yrs.  When Molly passed, Bill did his own laundry, made his bed and cooked his breakfast.  He made Molly proud! Dad joined his son's family (Brad and Diana Robinson) in Boise Idaho just before the Pandemic and safely went to Idaho where Bill had happy moments with friends and family.  He learned to smile again as well as give love and be loved and cared for by family in ID.  Bill was spoiled by his 2 youngest teenage granddaughters and thoughtful Daughter in Law for the last 18 months of life.  The teens competed to be Grandpa’s favorite!  Grandpa promised to take the girls to Chick-fil-A every Sunday!  Bill loved the attention and appreciated the care.  In June of 2021 Bill was accompanied by family one last time to Texas to see his Sister, Brother, Daughter and other family members .   Bill traveled very well and loved the attention and seeing his friends and family in Texas one last time.

Bill left with a loving family at his side.  His family is sad, but happy knowing Bill and Molly are free of the pain from aging and Happy in the Comfort and Peace of Heaven~

We are very very proud of everything our father represented and provided for so many.  We are blessed for every minute that we shared with Dad.  We love and miss him but we know he is working hard as an angel in heaven watching over all of us surrounded by his loved ones and hand in hand with Molly~

To send flowers to the family or plant a tree in memory of William Robinson , please visit Tribute Store