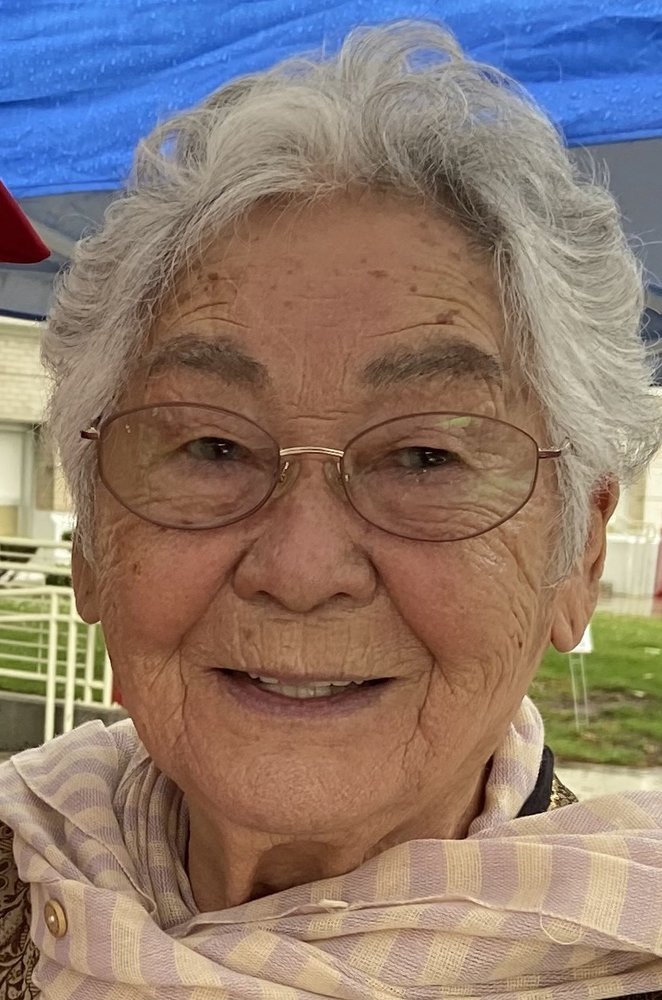 Setsuko Yashima Elliott was born August 10, 1935, at home in Sendai, Japan, to Yoshimatsu and Chiyo Yashima. She was the third child of five. During her childhood years, she and her older sister, Enako, helped their mother after their father died when they were young. They got into escapades that caused them to laugh in their later years. Stealing persimmons, and garden vegetables were favorite stories. World War II hit Sendai very hard. Setsuko remembered picking grass out of the cracks of sidewalks to help feed her family when she was a child.

In school, Setsuko was a good student, but was better known as the best volleyball player in Northern Japan. She received a full scholarship to attend university as a volleyball player. She was needed at home, however, and wasn’t able to attend.

The war ended and the occupation of Japan by Americans brought a handsome man to Sendai. Setsuko met her future husband, Sidney Elliott, dancing in downtown Sendai. Their courtship was always the source of amusement for the family. Eventually, in 1957, Sid and Setsuko married and he brought her to the United States. She taught herself how to read and write in English by laboriously translating news articles out of the Seattle newspaper one word at a time. While in Seattle, in 1959, Sid and Setsuko welcomed their first child, daughter, Sandra.

Sid was deployed to Germany in 1960. Setsuko was pregnant so he decided to move his small family to Boise where he had family to support them while he was gone. During that time, Setsuko decided to surprise Sid and become a naturalized citizen of the United States. She was very proud of her time spent at Boise High School studying. When Sid returned from Germany in 1961, he was the proud spouse of a naturalized U.S. citizen, and father again, to son, Michael.

Setsuko spent her time with her family and their various endeavors. Setsuko supported Sandra as her Girl Scout troop leader and the Guardian of Bethel 52 for Sandra’s time as a Job’s Daughter and an Honored Queen. She could regularly be found catching baseballs in the backyard for Mike as he practiced his pitching, conducting guitar practice and attending DeMolay activities. She supported Sid during his career and his time as the Master of Masonic Lodge #1. Setsuko was also involved in the Daughter’s of the Nile. She never missed any of her family’s activities.

When Sandra and Mike were nearing the end of their high school years, Setsuko was hired to work for Hewlett Packard. She worked her up way to become a prototype specialist. She made many life-long friends during her years there.

Sid and Setsuko loved the outdoors. They spent a lot of time camping and fishing all over Idaho. Setsuko also loved to garden and grow flowers in her yard.

The Elliott home was the center of many family gatherings. Setsuko opened her home to family and friends.

Later in life, after Sid passed, Setsuko worked hard to rebuild her life and make friends. She joined various senior activities and played pinocle several times a week. Her favorite was the Eagle Senior Center. She even gave up smoking cold turkey after more than 50 years. We were all so proud of her. Not smoking allowed her to survive multiple bouts of illness. She was proud that she never caught Covid.

Throughout her life Setsuko was able to travel. She regularly visited Japan to visit her family. She was fortunate that they came to the United States as well. Most of her family still resides in her hometown of Sendai, Japan. Setsuko loved to travel and included a jaunt to New Zealand, with a layover in Tahiti, went to Chiang Mai, Thailand, to visit friends and cruised in the inland passage of Alaska. Never one to let a good time pass, Setsuko rode an elephant while she was in Thailand. Setsuko traveled with Sandra and husband, John, on many trips through out the U.S.A. and Japan. She also went fishing in Alaska with Sandra and Mike.

In lieu of flowers, the family respectfully requests a donation be made to the Eagle Senior Center or the Shriner’s Hospital for Crippled Children in Setsuko’s name.

On August 16, those who would like to escort Setsuko to Morris Hill Cemetery will gather at Summers Funeral Home at 3629 E. Ustick Road in Meridian at 2:30 P.M. departing at 3:00 P.M.  to the graveside service at Morris Hill Cemetery, 317 N Latah Street, Boise starting at 3:30 P.M. A Celebration of Life at the Barber Park Event Center, 4049 S. Eckert Road, Boise, will start at 5:00 P.M.  Parking will be provided.

To send flowers to the family or plant a tree in memory of Setsuko Elliott, please visit Tribute Store
Monday
16
August

Share Your Memory of
Setsuko
Upload Your Memory View All Memories
Be the first to upload a memory!
Share A Memory
Send Flowers