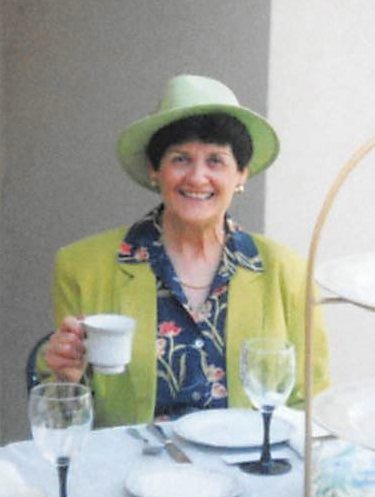 Rita Ann Landriani of Boise, Idaho finished her life’s journey on July 5, 2021 with her husband and son by her side.

Rita was born February 24, 1943 to Michael and Clara Mullin in Eccles, Manchester, U.K. She began her journey arriving in the United States in the early 1960s. After receiving her citizenship, she found her way to Idaho, where she met Jim Manos in the early 70s, they married in 1974. Four years later their son Chris was born and here she would raise her family.

Rita loved dedicating her life to family, friends, and the Greek Orthodox Church. She did anything for family, even if it put hers in a bind. She was sociable, always interested in people’s stories. She served 40 plus years as a member of the Daughters of the Penelope, a charter of the church. In her downtime she loved knitting and crocheting, a talent she passed along to her oldest granddaughter. Rita was also musically gifted, where she spent time with her youngest granddaughter teaching her to play piano. Her other biggest joy was dancing. If music was playing, she always found her way to the dancefloor. She enjoyed the spotlight at the Greek Food Festival, where she’d just start Greek dancing by herself or other times grab members of the audience to teach and make them feel a part of the culture. Rita was a special person and she will be forever missed.

Rita is survived by her brother Albert, her sister Sheila, her husband Bill, her son Chris, his wife Donna, and their two daughters Makayla and Kenzie. She is also survived by numerous nieces and nephews in the United States and United Kingdom. Rita is preceded in death by her parents Michael and Clara, her brothers Malcolm, Joe, and Brian, her sisters Maureen and Joyce.

To send flowers to the family or plant a tree in memory of Rita Landriani, please visit Tribute Store
Monday
19
July

Share Your Memory of
Rita
Upload Your Memory View All Memories
Be the first to upload a memory!
Share A Memory
Send Flowers