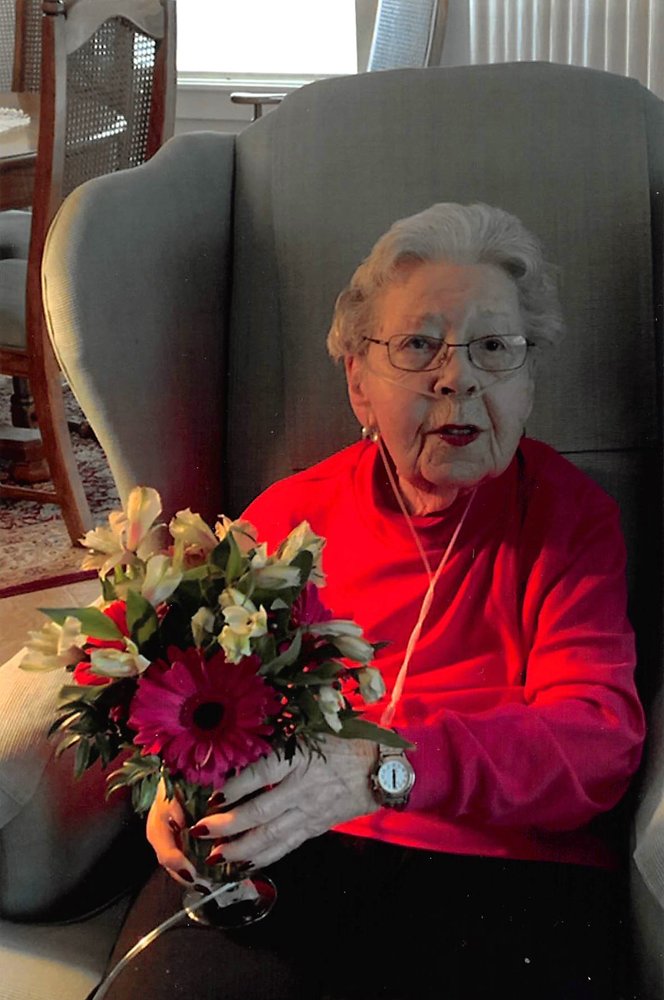 Maurine Hutchings, 94, passed away peacefully on June 15, 2021. Maurine was born April 26, 1927, in Centralia, Kansas to Byron Lee and Marie Thornton. She was later joined by a brother, Duane. She moved to Meridian, Idaho when she was 8. She attended Ustick Elementary School and Meridian High School, graduating in 1944. Later that year, at the age of 17 ½, she married Norman "Hutch" Hutchings on October 10, 1944. That was the beginning of a love story that lasted 71 ½ years until Hutch's passing in 2015.

During WWII, Hutch was stationed in Reno, Nevada with the USAF. Maurine worked at a local grocery store, from which she could take home damaged canned goods and vegetables to supplement their rationed food supply. Through their years in Reno, they also began to form the first of many life-long friendships.

After the war, Maurine and Hutch returned to Boise where Hutch worked as a salesman for Salt Lake Hardware Co. Their daughter Debbie was born in 1951. The next year they relocated to Caldwell and welcomed son Kim in 1955. They remained in Caldwell until 2006 when they returned to Boise to be closer to their children.

Shortly after moving to Caldwell they began dancing-first square dancing, and later ballroom dancing. A week did not go by for them without dancing Saturday nights, and sometimes during the week. Dancing was their means of socializing and exercising.

We were fortunate to have our mom as a stay-at-home mom. She was an immaculate house keeper, an extraordinary seamstress, flower gardener with a green thumb, and an excellent cook, especially pies and cookies. She generally took a tin of cookies to most functions, including doctor's appointments - thus earning the nickname "The Cookie Lady". Maurine loved holidays and family gatherings, decorating and setting a beautiful table.

After Hutch retired, he and Maurine traveled extensively, including 3 cruises, but mainly focused on travel within the United States. Each September-October, they would travel by car across the US, taking a different route each time. Each trip lasted 6-8 weeks. They had visited all 50 states and all but one province in Canada before their travels came to an end. Since Mom had never met a stranger, they met people on every one of their trips who became long-time friends. Up until 2 months before her death, Mom corresponded with many of those couples.

Maurine was a loving mother and grandmother, and always a lady in her appearance. She and Hutch were so excited to become grandparents and then great-grandparents. When Hutch passed away, her life changed, but she remained surprisingly strong. She was pre-deceased by her husband, Hutch, her parents and in-laws, her son-in-law Gary Barnes, and brother Duane Thornton, as well as numerous brother and sister-in-laws. She is survived by her daughter, Debbie Barnes and son, Kim Hutchings (Trina). Also surviving Maurine are her grandson Zach Barnes (Bobbie), great-grandsons Preston Barnes, Skyler Ramos, Payton Ramos and Jaceb Johnson, granddaughter Amy Blackledge (Tom), grandson Chris Hutchings (Stephanie), great-grandchildren Hunter and Sage Hutchings, and grandson Ryan Hutchings and great-grandson Ethan.

The family is thankful for the excellent care given to our mom by Lynn Odekirk and Shantel Morgan, as well as the caregivers from Family Home Resource Care. We know that your love, compassion and care· for Maurine made her final days much easier.

In lieu of flowers for Mom, please deliver flowers to a friend or shut-in. Mom always said she wanted to enjoy flowers while she was living so she could see them. We hope you will pay that forward to someone you know.

Funeral services will be held Monday, June 28, 2021, at 2:00 pm at Summers Funeral Home on Ustick Road, with internment to follow at Cloverdale Cemetery.

To send flowers to the family or plant a tree in memory of Maurine Hutchings, please visit Tribute Store
Monday
28
June

Share Your Memory of
Maurine
Upload Your Memory View All Memories
Be the first to upload a memory!
Share A Memory
Send Flowers