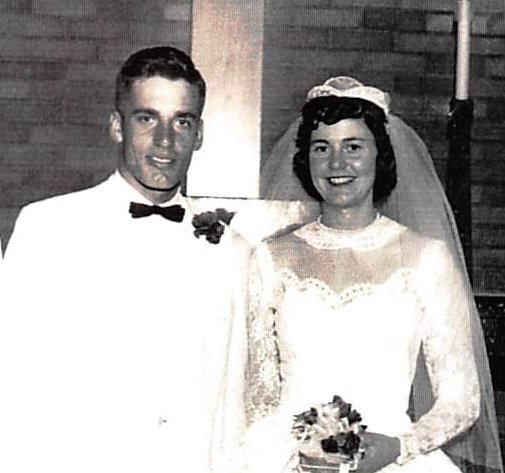 Clarice Giesler passed away of Endometrial cancer in the early morning of Thursday, June 3, 2021.

Clarice was born on March 28, 1936 in Jamestown, ND to Eunice and Nels Strand, the youngest of eight children.

She met Conrad Giesler on a church hayride; they became High School Prom dates, and then married him while he was on Army Christmas Leave in 1958.

She graduated from Valley City State University in Valley City, ND, and furthered her education at Boise State University. She began teaching in a one-room school in Barnesville, MN,and retired as an English teacher  in the Boise School District. Clarice also enjoyed employment at ID State Vocational Rehabilitation, ID State Board of Medicine, and the ID State Tax Commission.

Known as “Nana” to her 3 Grandchildren, she loved traveling and having special times with them as they grew up.

She also enjoyed having coffee with her friends, Bible Study Group, watching and cheering loudly for BSU Football and Womens  Basketball, and travels with her beloved husband.

Six hours after Clarice passed, her husband of 62 years died of Parkinson’s Disease.

Conrad was born in an adjacent ND county,on  April 22, 1936, raised on a ranch, and trained to ride horses early on. He graduated from North Dakota St University, and served two years in the US Army. He enjoyed writing special surprise romantic poetry to Clarice.

His career in business accounting and auditing took his family to Rapid City, SD, St Louis, MO, and finally, Boise, ID since 1974. He held positions of Division Controller for Boise Cascade and Woodgrain Millwork. He earned two national awards for manuscripts published by the Institute of Management Accounting and retired as an Auditor with the ID State Insurance Fund. He continued to work as a tax preparer to the public for 23 years.

He enjoyed horseback riding into the ID backcountry, and felt blessed to enjoy skiing with his children and grandchildren. Both “Con and Clare” loved attending and volunteering for the Sun Valley Jazz Festival.

He is preceded in death by his parents Arthur and Inez, and sisters Marlys and Eileen. He is survived by a brother Dennis and his wife Mary.

Conrad and Clare are survived by son Todd, and daughters Tracy and Tricia, grandchildren Jeff, Lauren, and John. Clarice wanted it known here that “Lynn, Molly, Ben, Casey, Kim, Brad, Chris, Lindsey and Dave were special additions to their family.”

A Memorial Service at Shepard of the Valley Lutheran Church is scheduled for noon on Friday, June 25.

Donations can be made to the City Light Women’s Shelter (in their former church, St. Paul’s Lutheran Church) or to Parkinson's research.

Share Your Memory of
Clarice Lavon
Upload Your Memory View All Memories
Be the first to upload a memory!
Share A Memory
Send Flowers