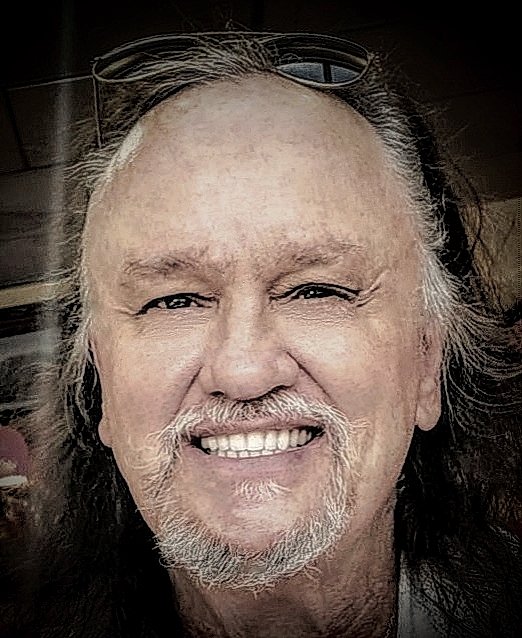 Dave Robinette was born October 19, 1953 in Chattanooga, Tennessee to Bruce K and Dorris Jeanne (Wall) Robinette. At an early age Dave's family moved to Brigham City, Utah, his father's birthplace, soon after the family settled in Ogden, Utah.
Throughout his youth Dave had an obsession for music. His first instrument was the violin until one night in 1964 he witnessed something that made him crave the sound of an electric guitar.
The Beatles made their US debut on The Ed Sullivan show and Dave lost his mind. With wide eyes and an infectious laugh, Dave loved to tell how he instantly got up and started jumping on the couch, nobody could stop him after that defining moment.
After winning the Battle of the Bands in a group called Blues Rival, Dave became lead singer of the band Callus. He along with original members, Chuck Montes, Bobby Hickey, Cordell Baird and David Love    formed a brotherhood. Callus played throughout the Wasatch Front, the West Coast and Canada.
Later Dave, along with Russ Martin, Chris Guida and Todd Penrod formed a group named The Shield, which brought an exceptional amount of talent to Boise. Dave's younger brother Darren Robinette, also an accomplished vocalist, later joined the group.
Dave was proud of the music he and all his fellow band mates created over the years but he was extremely proud of The Solution Brothers, this band was his baby. The group featured Dave, Jon Hyneman, Jeff Glass, Rod Dyer and Mike Rosenthal. The caliber of musicians, nothing short of exceptional, each contributing to a sound that cannot be duplicated.
Dave was also a guitar instructor and repairman for years at Dorsey Music until health problems forced him to focus on finding specialized help elsewhere. Dave reunited with Tymilynn Uhl in 2008 and together they relocated to Ogden, Utah and then Las Vegas, Nevada. After completing the treatment Dave needed, the two returned to Boise. The love and devotion Dave and Tymilynn have for one another is eternal. He lovingly called Tymi his hummingbird and Dave will always be her heart. The remaining 8 days Dave spent in isolation was the longest Dave and Tymi had ever been apart.
Dave's life and contributions to the Treasure Valley cannot be properly penned in an obituary but if you've ever been fortunate enough to have caught a performance including Dave Robinette, consider yourself as I do, touched by an angel. Rest my sweet Dave, my heart and my soul, I will love you always and forever.... Tymilynn

A memorial service for Bruce will be held at a later date.

To send flowers to the family or plant a tree in memory of Dave Robinette, please visit Tribute Store

Will be held at a later date

Share Your Memory of
Dave
Upload Your Memory View All Memories
Be the first to upload a memory!
Share A Memory
Send Flowers