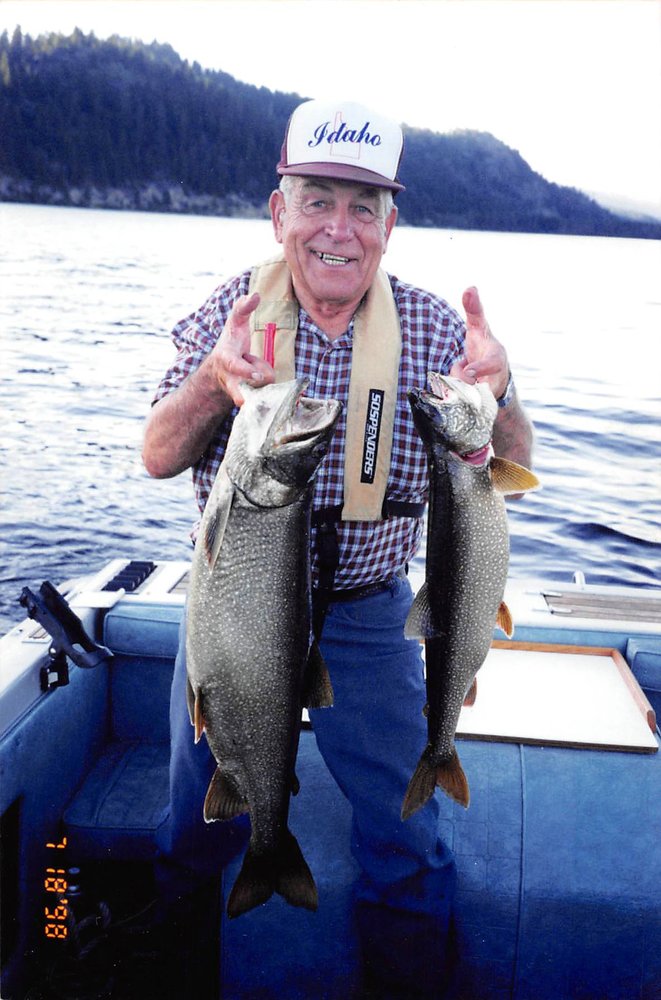 Probably the best description of Boyd would be that his life was "defined by love." It would be hard to find a kinder, more caring man…. a gentle giant and true gentleman with a quick smile.

Born in La Pointe, Utah to Willis and Jane Allred, most of Boyd's younger years revolved around farming with his father in the Fort Hall/Blackfoot, Idaho area.  He was no stranger to backbreaking labor and his work ethic will certainly be passed on to ALL generations who follow him.

He was a true patriot who joined the Army/ Air Force at age 18 and served in Japan at the end of World War II, just missing the final conflict. He loved to share his stories and adventures of that time of his life. Boyd loved music - especially the hymns, and was self-taught on the harmonica.   After returning from the war, he won his sweetheart's heart by playing a song for her at a Church activity, “Have I told you lately that I love you”.  They married soon afterwards on March 15, 1950 in the Idaho Falls Temple, and have been "that couple” ever since - inseparable - and always holding hands.

Shortly after their marriage Boyd trained as a welder and that occupation served him well until his retirement at age 70. He could do anything with metal, designing and building utility handcarts, two hydraulic log splitters and a multitude of other projects, starting with rough sketches and notes on scrap pieces of paper. Boyd never did anything half-way!  One of his foremen once said of him:  "The only thing Boyd can't weld is the crack of dawn!"

In 1964 his career took him to Boise where he and Maudene lived for nearly 60 years in the same home. Three children joined their family: Deanne, Laren and Jay and later 13 grandchildren and 29 great grandchildren. Memory upon memory was made as a family camping and fishing over the years - a passion he passed to ALL of his posterity. The phrase "I'd rather be fishing" described him perfectly and like anything else he did, he was amazingly good at it! A member of the Church of Jesus Christ of Latter Day Saints, Boyd loved the scriptures and was a sterling example to all.

Boyd is survived by his wife, Maudene, their three children and spouses, their grandchildren and great grandchildren, and three sisters, Voneta, Venice, and Donna Mae. He is preceded in death by his parents Willis and Jane, and his sister, Carma.

A funeral service will be held on Thursday, February, 4, 2021 at 11 AM at the Church of Jesus Christ of Latter-day Saints Bel Air Ward,  701 S Curtis Rd. Boise, with a private burial at the Idaho States Veterans Cemetery following.

To send flowers to the family or plant a tree in memory of Boyd Allred, please visit Tribute Store
Thursday
4
February

Share Your Memory of
Boyd
Upload Your Memory View All Memories
Be the first to upload a memory!
Share A Memory
Send Flowers