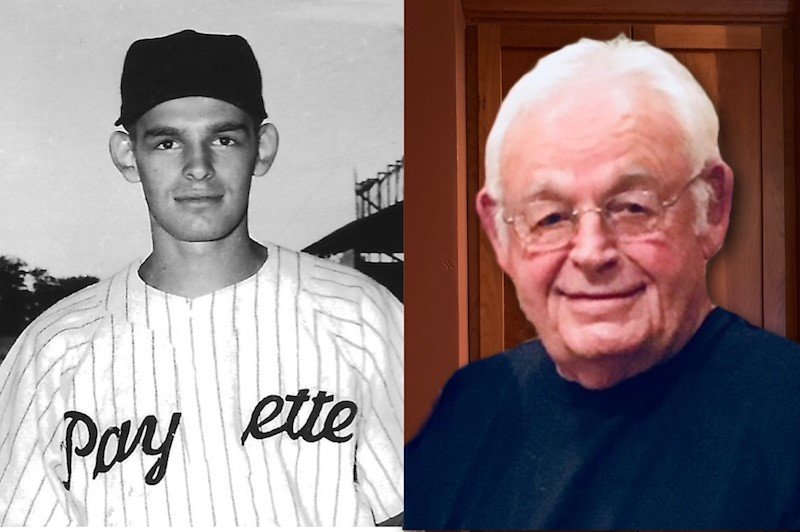 Kenneth Owen Schmidt, a wonderful Father, Grandfather and friend to all who knew him, passed away January 7, 2021, peacefully at his home surrounded by his family at the age of 83. He  succumbed to pancreatic cancer.

“Kenny” as he was known to everyone, was born in Bridgeport, Nebraska on January 4th, 1938. At the age of 5 he moved along with his family to Payette, Idaho where he grew up and attended grade school and high school, graduating in 1956. He was a two year baseball teammate of Harmon Killebrew and won the “Harmon Killebrew Award” for best all-around athlete his senior year.

Kenny later played for semi-pro team, the Payette Packers as well as Idaho State University and USMC team after joining the Marine Corps in 1958. He was later invited to training camp for the Pittsburg Pirates but was unable to attend due to his Marine Corps commitments. Ken’s brother Mac was also a professional baseball player who signed with the St. Louis Browns, which later became the Orioles.

Kenny was married to Nancy Prescott of Jerome, Idaho in 1959 and had two children; a daughter, Wendy followed by his son Kevin a few years later. The marriage lasted until 1965 and even though he had some very long and close relationships, Kenny never remarried.

After an honorable discharge from the Marine Corps in 1962, Kenny began working in the bar & restaurant business where he managed bar operations at the Downtowner, Owyhee and Irongate Lounges. In 1973 he moved to Portland to work for Beverage Representatives Corporation where he enjoyed great success as a sales representative. In 1984, Kenny retuned to Boise to found Beveragewest Inc, a company brokering liquor for Seagrams, Heublein, McCormick, Hood River, National Distillers, Paddignton and Heaven Hill. After a long and respected career in the liquor industry, he sold Beveragewest in 2000 to retire. After the purchasing company folded he and his son Kevin reopened Beveragewest briefly in 2007 where he worked as President emeritus for three additional years.

Kenny liked sports of all kinds. He was a Boise State Bronco fan and enjoyed fishing and watching his grandchildren Alexa and Brian participate in basketball, baseball and golf. Since their first tryouts, he never missed a game or a match, often arriving early to secure the best seat or grabbing a cart to watch them play hole by hole. He was their greatest fan.

Although Ken was gifted in many sports, his biggest love was the game of golf where he excelled  as a player up until weeks before his death, often shooting his age or lower. He was a member of a group that played regularly at courses throughout the Valley and spoke often about the close friendships he maintained with the crew and looked forward to playing each week. Quiet, yet extremely witty, Kenny always had a wry grin on his face and an easy manner that was embraced by everyone in his foursome. Never a harsh word was spoken about Ken Schmidt.

Kenny was proceeded in death by his Father, Walter Schmidt, his Mother, Velma Schmidt, his Brother, Mac Schmidt, his Uncle, Charley Cox and his Niece, Carla Luchi.

Anyone who knew Kenny was aware that he was a simple and unassuming man. He wished to be cremated and have a simple gathering of close family and friends, preferably centered around golf. Due to the winter weather and COVID restrictions we will be having a celebration of life for Kenny this spring at Boise Ranch Golf Club. A specific date and details will be released directly to family and friends in the coming months.

Always charming and funny,  he was the definition of “easy going”. Kenny will be sorely missed by his family and  friends. He was truly one of a kind.

To send flowers to the family or plant a tree in memory of Kenneth Schmidt, please visit Tribute Store
Print
Share A Memory
Send Flowers