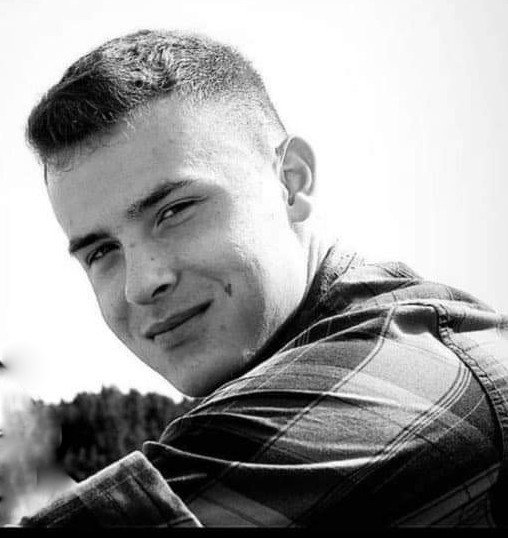 Davis was born on August 26, 2000 in Boise Idaho.  He is survived by his parents John J. Mosqueda & Monica L. Mouw.  Davis has 5 siblings, Adriana, John, Michael, Lillian, & Joseph. Davis fell in love with the outdoors at an early age while spending time in Yellow Pine, Idaho with his great-grandparent's John & Barbra Davis, his name sake.

Davis loved spending time on fishing & hunting trips with his dad, grandfathers, brothers, and extended family.  Davis had a love of history & anything to do with muscle cars; especially Ford Mustangs.  Davis was also passionate about shooting, playing sports from baseball to football, talking about cars and going on camping adventures with his sisters, brothers, cousins and close friends. One of Davis’ favorite past times was simply hanging out at home. Davis loved playing video games with his brothers. He was always happiest when surrounded by his brothers, sisters and cousins.

Alongside his mother Monica, Davis had several grandmothers, aunts and his step-mother, Dominque all of which loved him deeply. Davis took great joy in being around all these great women. They taught him to always be a gentleman and to respect all women.  Davis loved pretending that he did not like being babied by them, yet basked in their affection.  He truly loved and worried about them all.

Davis had a strong faith in GOD and he shared that with his family, friends and his beautiful girlfriend, Mary, who Davis deeply cared for. Before Davis came home Mary had written that during her time with Davis, he had “shared his relationship with the Lord..”  and “opened (her)eyes to the boundlessness of His forgiveness.” and that, “We have to forgive those that hurt us, because Jesus died for us so that we could be forgiven.”

Davis’ kind heart and spirit could not stand to see anyone who couldn’t protect themselves be in danger.  His complete loyalty to his family and friends was never in doubt.  Initially the desire to help others began so that he could be like his childhood heroes;  Superman and Spiderman, followed by a close second was his father, grandfathers and uncles.  As Davis grew older, Davis still felt that calling and felt the best way to do that was to earn the title of U.S Marine.  Joining the USMC was never about using the money for college or just doing something after high school.  It was something Davis had decided he wanted to do since he was in the 4th grade.  He really wanted to help people by protecting them as a U.S Marine.  He left for bootcamp in late July of 2018.  He was still 17 when he enlisted.

Davis always pushed himself and was continually striving to be the best that he could be.  As a result, he was chosen to join the elite Silent Drill Platoon.  Davis always held himself to a high standard and was driven to make his family proud.

“Lance Corporal Mosqueda was one of only 19 Marines selected out of 86 early last year, from there, he outcompeted his peers during spring training while in Yuma, AZ to earn a spot on the Marching 24.  In November, he was one of 3 Marines nominated to be the next Assistant Drill Master; a coveted position meant for our very best.  He was ultimately selected for the job by the company board (T.A. PASTEL, Colonel, USMC Commanding Officer)”.

Davis was never one to openly express what he was feeling or whom he had deep feelings for, unless he was in private, or the person in need just really needed to hear it…whether they wanted to or not.  Even through that tough exterior, the people close to him never doubted how much Davis loved them.  Davis’ love, affection, and loyalty were extended to his family, friends, and Marine Brothers.  Davis always wanted the best for those in his circle and would never give up on them.  Davis was constantly calling to check on his family, and friends, just in case they needed anything.  Davis was always there for everyone, and if you were a friend or family member, Davis always had your back.  Davis would always put others first.  Even if that put his own life on hold or in jeopardy.

He didn’t stray from his beliefs, especially on Dec. 30, 2020 when he was taken from us while protecting a young lady.  Davis died like he lived, and he bravely lived up to being a U.S. Marine.  He faced his attacker head on, and did not turn and run. Davis, died like a man.  Davis, made his father, his mother, and every one of his family and friends proud.  Davis may no longer be physically with us, but Davis’ love, loyalty, humor, sense of honor, and bravery will continue to be a part of everyone that knew him. Until we are all together again in GOD’s glory.  RIP Davis Mouw Mosqueda, Lance Corporal, USMC, our son, grandson, brother, nephew, cousin, boyfriend and friend.

To send flowers to the family or plant a tree in memory of Davis Mosqueda, please visit Tribute Store

Share Your Memory of
Davis
Upload Your Memory View All Memories
Be the first to upload a memory!
Share A Memory
Send Flowers