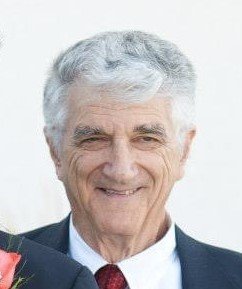 On Wednesday, November 4, 2020, Heber Grant Moore of Boise, Idaho passed away at the age of 90, where he was a resident for 35 years. Before moving to Idaho in 1985, he was a resident of Silver Spring, Maryland for 23 years. As a youth, he grew up in Billings, Montana.

Born on January 18, 1930 in Belfry, Montana to Charles Albert and Eva Jane (Jones) Moore, Heber was the 12th of 13 children and he learned from a very young age to make the best of every situation and to appreciate the small things in life..As a young boy from Billings, he never imagined that one day he would become an airforce pilot and help train Apollo, Gemini and Mercury mission astronauts--but he did.

From 1949 to 1951, Heber served a volunteer three-year mission, serving then without “purse or scrip,” for The Church of Jesus Christ of Latter-day Saints to the Northern States Mission, which at the time consisted of Wisconsin, Illinois, Iowa, Michigan, Indiana, and Ohio. Reflecting on his mission experiences, he often said what he learned and the people he met then far outweighed any struggles he later would experience.

Heber served in various branches of the United States military as an officer and civilian, he received training in the ROTC and served in the U.S. Air Force, where he was trained as an airforce pilot.

Heber worked for the National Aeronautics and Space Administration (NASA) as an Astronaut Training Officer in its Office of Advanced Man Mission Planning for the Apollo and lunar lander space programs. He also worked for many years as a civilian for the U.S. Department of Navy in Arlington, Virginia. After 45 years of working for the U.S. government, he retired from government service and moved to Idaho where he spent his next 27 years teaching psychology and statistics at Boise State University which he said was “one of the most enjoyable things I have done in my life.”

While working for NASA in 1963, Heber was assigned to speak to various universities about the Gemini, Mercury, and Apollo programs. As part of the astronaut prep team, with his airforce pilot training and background in human factors, he explained to college students what astronauts would do in the event of an emergency while in space, such as if the capsule began to lose oxygen--what steps must be taken before one is unable to perform in space. “This was particularly interesting to engineering students,” he said.

Heber was a business entrepreneur. With his love of music, he was the founder and owner of Music Masters in Meridian, which offered musical instruction and development.

As a Latter-day Saint, Heber served in numerous church callings. On several occasions, he was called to serve on the high council of the Maryland Silver Spring Stake. While attending the University of Michigan, he served as the second counselor in the bishopric. He served as the Young Men’s President, teacher development instructor and on the high council in the Silver Spring Ward. In Meridian, Idaho, he served as a high priest quorum teacher and teacher development instructor in Meridian South 4th Ward.

Heber was a devoted husband and father of ten children. Heber had a beautiful bass-singing voice and he loved to harmonize with others. His children and grandchildren all enjoyed sitting next to him at church, so that they could hear him sing. Heber is best described as one who was relentlessly optimistic, self-reliant, anchored in sagacious judgment, a counselor offering lapidary advice, exemplar of humane values, with a questing mind.

A viewing will be held on Monday, November 16, 2020 at 11:00 a.m. at The Church of Jesus Christ of Latter-day Saints, Meridian South 4th Ward, 2650 South Five Mile Road, Meridian, Idaho with the funeral service following immediately after beginning at noon. A private family service will be held at Veterans Memorial Cemetery later that day.

To send flowers to the family or plant a tree in memory of Heber Moore, please visit Tribute Store
Monday
16
November

Share Your Memory of
Heber
Upload Your Memory View All Memories
Be the first to upload a memory!
Share A Memory
Send Flowers