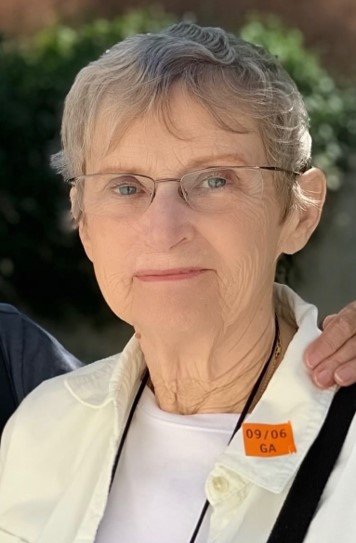 Jacqueline Kay (née Nelson) Stackman passed away peacefully after a brief illness on August 20, 2020. Her death, at age 80, came two weeks after her 60th wedding anniversary to her beloved husband, Wayne.

Born on September 6, 1939 in Boise, Idaho, her formative years were spent primarily in Boise with stints in Emmett (Idaho) and Clarkston (Washington) before living in Tacoma (Washington) during World War II. She is a graduate of both St. Teresa’s Academy (Boise) and Marylhurst College (Lake Oswego, Oregon).

Jackie and Wayne were married at Sacred Heart Catholic Church (Boise) on August 6, 1960. After initially making their home in Boise, they briefly lived in and near Madison, Wisconsin before settling in Modesto, California in 1966. They lived in Modesto until returning permanently to Boise in 2013.

Jackie spent her life and excelled as a homemaker, mother, and wife. She especially enjoyed reading and travelling, and loved spending time at her and Wayne’s log cabin in the Sierra Nevada mountains near Avery, California. She and Wayne explored most of the United States together, visiting Hawaii more than 15 times. She visited New York City several times, partaking of Broadway plays and musicals and other cultural events, with her two kids, Richard (Oakland, California) and Debra (Sunnyvale, California), who survive her. Over the past 15 years, she relished trips with one or both of her children to Maui, England, Italy, France, and Australia.

Jackie was preceded in death by her parents Bernard and Ada Nelson, of Boise. She is also survived by two grand puppies, Aries and Roux; “adopted” son Frank; and many nieces, nephews, and grand-nieces and grand-nephews. Jackie is deeply missed by Wayne and her children who loved her beyond measure and prized her wisdom and company. Extended family and friends frequently expressed their love of and admiration for Jackie during her lifetime and since her passing.

The family wishes to thank the amazing kindness and care exhibited by the nurses and doctors at St. Luke’s Hospital.

To send flowers to the family or plant a tree in memory of Jacqueline Stackman, please visit Tribute Store

Share Your Memory of
Jacqueline
Upload Your Memory View All Memories
Be the first to upload a memory!
Share A Memory
Send Flowers