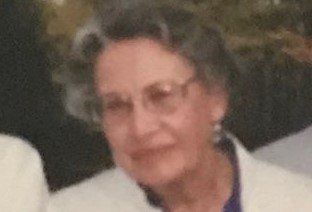 Nolene passed away peacefully on August 19, 2020 after a long courageous battle with Alzheimer’s. She was born in Rexburg, Idaho on October 20, 1925 to Mary Blanche Valentine and Franklin Clyde Peck, the fourth of six children.

As a young child her family moved to a farm near Boise, she would spend the rest of her life in Boise. She is admired by family, friends, and acquaintances for her life of kindness, hard work, and common sense.   From an early age her days began and ended with farm chores.  During high school she worked as a switchboard operator for the telephone company. After graduating from Boise High School she continued as an operator until her children were born.

In 1947 she married Vincent Clair Breen in Boise. They had five children: Thomas, Ann, Kelly, Rodger and Bryon. Vince started a TV and radio repair shop in the late 1940’s, which later became Vince Breen TV on Broadway Ave. Together, mom and dad ran this business for several years. In 1964 she went to work as a Boise Police Dispatcher, later transitioning to Ada County Sheriff’s Department, rising to Supervisor. Eventual divorce put her into the primary breadwinner role. As a single parent of five children, Nolene often worked second and even third jobs part-time to make ends meet. She was always willing to babysit grandchildren and grandnieces/nephews. She took great joy in seeing her 6 grandchildren grow and took great pride in seeing their accomplishments.

Nolene was an avid reader and loved her daily walks. She continued her daily walks until an illness in her early 90’s made it impossible for her to continue.  She loved to travel and visited many places around the world including Hong Kong, Spain and Great Briton.  She loved family and was instrumental in initiating family reunions that still continue. Mom was close to her own and our dad’s siblings, nieces, nephews and cousins, so there is a large extended family she loved, and who loved her. Throughout the fifty plus years she lived on Manitou St. relatives and friends visiting Boise often stayed at Nolene’s house for the good food and company. Mom was a wonderful cook and was known among relatives and friends for her baked goods. The family especially looked forward to getting a tin of Christmas cookies every year.

Throughout her life she always put others’ needs before her own, whether it was her children, relatives, friends or just someone in need.  Nolene did whatever she could to help others. She was generous, kind and gracious throughout her life. Even after Alzheimer affected her, she remained a kind and caring person. After working from childhood into her seventies before retiring, she volunteered until she was 82 for the Ada County Guardianship Monitoring program, which oversees court-appointed guardians who care for a ward, a minor or a person declared incapacitated. Upon final retirement she received the MetLife Foundation, “Golden Honoree” award for her volunteer work at the National Association of Area Agencies on Aging awards program in Washington D.C.

Mom represented the best of humanity, and had positive effects on many peoples’ lives.  Her kindnesses will not be forgotten by the numerous individuals with whom she interacted.

No services are planned at this time, but the family plans to hold a memorial at a later date.

To send flowers to the family or plant a tree in memory of Nolene Breen, please visit Tribute Store

Share Your Memory of
Nolene
Upload Your Memory View All Memories
Be the first to upload a memory!
Share A Memory
Send Flowers