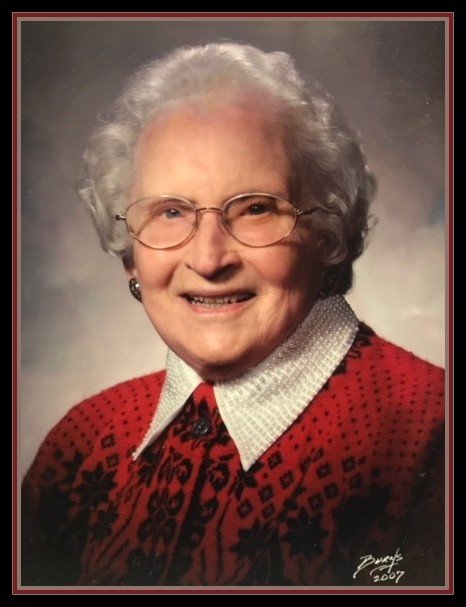 100 years young, Florence Alma Pehrkon Hoenk of Boise passed away peacefully June 18, 2020, after a rich life filled with many blessings.

Florence was born Oct. 17, 1919, to Fred Pehrkon and Louise Schultz in the house next door to her father’s garage on main street in Crete, IL. Her brother, Augie, preceded her in death in April 2007. Their brother Martin died in infancy.

Florence will be remembered as a trailblazer who followed her father’s spirit of adventure. Fred was born in Sasmaka, Latvia, and came to the United States by working on a sailing ship. He made his way to Crete, IL, where he first opened a blacksmith shop and later an automobile dealership and garage. She had fond memories of growing up in Crete, especially riding Cubby the horse with brother Augie.

After graduating from Bloom Township High School, she worked first at Hartman’s grocery store making $12 a week. She then worked in a beauty salon before World War II. She served in the war office distributing gas and sugar ration coupons, saving enough money to follow her dream of becoming an elementary school teacher. She took the train into downtown Chicago to attend and graduate from the National College of Education. During two years of college, she lived with the Joy family, taking care of their children.

Florence taught in Minnesota, Illinois, Missouri, Iowa, Mississippi and Wisconsin. It was while she was earning her masters degree at the University of Wisconsin where she met Paul R. Hoenk. They wed in Crete on June 30, 1956, and moved to Slidell, LA, where he had his first pastoral call as a Lutheran minister.

While living in Slidell, the couple was blessed with two daughters, Mary Elizabeth and Barbara Jean (B.J.) Next Paul was called to Milwaukee, Wis., to serve as a Lutheran pastor and then he was called to Iowa City, IA, where he became campus pastor of St. Paul’s Lutheran Church.

After the family moved to Iowa City, Florence taught elementary school. One of her greatest passions was teaching children to read, especially at Hoover Elementary School. She retired from the Iowa City School District in 1982 and was a lifelong member of the National Education Association (NEA).

After Paul died in January 1981, Florence moved to Boise, ID, for the birth of her granddaughter, Hailey in 1990, and later her grandson, Richard James (R.J.) in 1993. She counted them as her greatest blessings and became their role model and teacher. She was always involved in their lives, volunteering at Highlands Elementary School and as a spectator at their sports events and activities.

In her travels outside of Boise, she visited places such as Iceland, England and elder hostels in the Southwest. She made many trips to Santa Fe, NM, to be with daughter Mary, who became an educator following her mother’s footsteps, and husband Barry.

Florence brought much joy to many people as her influence extended far and wide. In Boise, she always looked forward to her visits to the Boise Senior Center, especially her exercise class and lunches. Her weekly routine until last December included lunch with good friend Jim on Thursdays at the Capri Cafe, and having Kristen wash and set her hair Saturday mornings.

She considered herself so fortunate to be able to celebrate with family and friends at her 100th birthday party at her apartment complex where she had lived on her own until January with the assistance of her devoted daughter BJ.

More than anything, Florence was a person of unwavering faith, living a life that was a tapestry of the teachings of scripture. She was grateful for the church people in her life both at Gloria Dei Lutheran Church in Iowa City and Immanuel Lutheran Church in Boise for helping to provide an expression for her faith. She has traveled on the wings of angels now and will remain in the palm of God’s hand forever.

Our family will always be thankful for all the medical professionals who helped Florence live until the miraculous age of 100 years and 8 months. Her secrets to longevity were exercising every morning and eating chocolate ice cream every day. Our gratitude also goes to the wonderful caregivers at Veranda Senior Living at Barber Station.

To send flowers to the family or plant a tree in memory of Florence Pehrkon Hoenk, please visit Tribute Store

Share Your Memory of
Florence
Upload Your Memory View All Memories
Be the first to upload a memory!
Share A Memory
Send Flowers