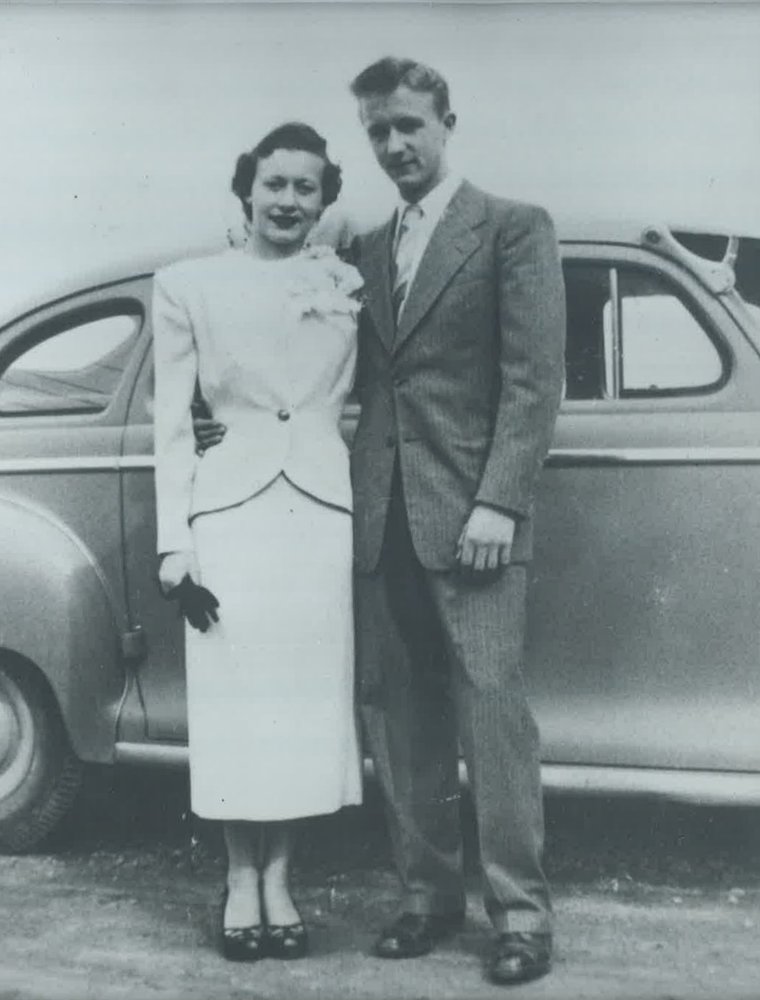 Corrinne (Connie) Buchanan Alder was born at St. Lukes Hospital in Boise on September 4, 1932 to Harry Aaron Baker Buchanan and Edna Beatrice (Mendell) Buchanan. She passed away April 23, 2020 in Boise.

Edna died when Mom was six; leaving her father to raise five daughters.

Eventually Harry took over his fathers’ Eagle dairy farm and the girls grew up helping on the farm.  During this time, Harry married Edith Ward.

Mom attended Pierce Park Elementary. The sisters were forbidden from stopping by Orville Jackson’s drug store and soda fountain after school.  However, she talked about the time that she and sister JoAnn were caught by Edith getting ready to enter the establishment. There was a punishment involved, but they were able to laugh about it in later years.

It was at Boise High that Mom met her forever love, our Dad, Larry Dean Alder Sr. The two were married just out of high school and had nearly sixty years together, until Dad’s passing on March 10, 2010.

Together, Mom and Dad raised five children in a raucous, loving atmosphere.  Spring and summer meant softball & baseball; Dad and all of us kids played and Mom was always in the stands cheering us on; sometimes keeping the scorebook.  There were the Friday night fights (most of them on TV).  Family pinochle games and often Saturday night pinochle parties with guests of the folks; always accompanied by Mom’s famous garlic chip dip. Car load movies at the Broadway Drive-In and occasional trips to Lucky Peak were a special treat in the summer.  At home we listened to the radio; always dialed in to KGEM and sang along to Mom and Dad’s 45’s. Mom’s favorite was Elvis and later on, Neil Diamond.  There were summer picnics and holiday gatherings with Mom’s sisters and visits from Dad’s parents and his sister LaVi.

Mom was a good cook and kept five growing kids very well fed. She made at least a hundred of her delicious pumpkin pies and her yummy rich shortbreads. Her BBQ ribs were also a favorite entree.

Along with keeping the household in order, Mom often had a job outside the home. She cashiered at Turners on State Street and spent time as a waitress at the Downtowner on Fairview, and at the old Black Angus where she worked for 25 years (some of that time with her good friend Bruna (who is today a treasured waitress at the Stagecoach.) Mom also helped her dad and his wife at that time, Louise (Minor) Buchanan, at their Petticoat Junction gas station and bar (now the State Street Stinker Station on the way to McCall)

After her husband died and during her battles with dementia and breast cancer, her children watched over her.  Always with a stubborn streak and a wish for independence, she insisted on staying in her own home until her illness required assisted living and then hospice.

We would like to thank the staff, and especially Teresa, Rita and Ellen, at Grace Assisted Living for taking such good care of our mom.

Also, we thank Encompass Hospice and Emily, Josie and Amie for their compassion and kindness toward her.

We would also like to thank, Ryan, Toni & Bug for making a home for mom's sweet dog Tyke.

Connie is survived by her five children; Sandy (Dick) Anderson, Greg (Shelly) Alder, Vicki Heazle, Larry (Marie) Alder and Lorri (Mark) Lee.  Also Randy Lee who became like a son to her. Several  grandchildren great grands and great great grands survive her; Jessi and James Kapitanich (Emily and Adam Wallace (Noah and Sophie), Katie and Leland Trent(Arielle),  Abby Kapitanich (Sawyer),Kris and Cristina Skeers (Taylor and Baily), Shane and Kara Alder(Tretten), Mark and Kaye Heazle (Will and Violet) David Heazle, Tom Lee and John Alder. She is also survived by her sister Peggy Peterson and her husband Pete and many special nieces and nephews.

Connie had asked that there be no services. She simply wanted to be cremated and laid to rest with her husband, Larry.

Mom rarely drank, but when she did her beverage of choice was a Greyhound. So tip one back in her memory!

May the road rise to meet you.

May the wind always be at your back.

May the sun shine warm upon your face.

And until we meet again;

May God hold you in the palm of His hand.

We love you Mom

To send flowers to the family or plant a tree in memory of Connie Alder, please visit Tribute Store