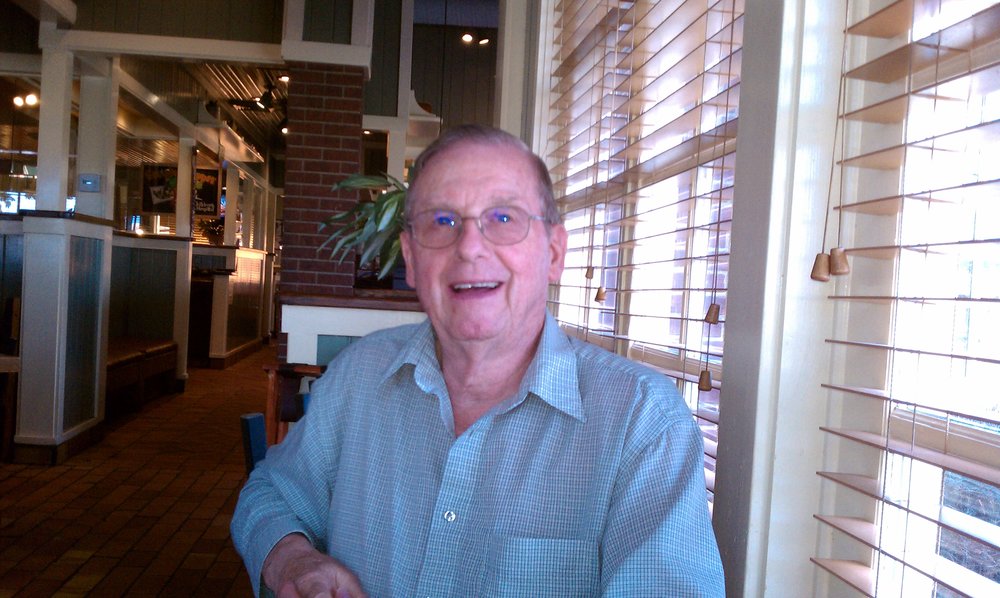 Russ was born in Twin Falls, Idaho, to Floyd and Lydia (Carroll) Johnson on October 24, 1932.  He was the oldest of 8 children.

He grew up poor, at a time when nearly everyone was poor. His childhood was spent around the Magic Valley where he attended many different schools. His best friend growing up was Glenn Scott.

Russ played coronet as a child, & he loved good piano music throughout his life.

Russ delivered newspapers until the new Child Labor Laws stopped him, and then he worked as an assistant baker, as a kitchen assistant for Morrison-Knudsen, and then worked as a gas station attendant.

In 1949, Russ joined the Idaho National Guard starting out as a jeep driver, later becoming a tank mechanic after attending school at Fort Knox, Kentucky.

In 1956, he was commissioned as a Second Lieutenant. He later became Commander of the Howitzer Battery in Homedale, Idaho. In 1977, he transferred to the 6228th US Army Reserve School in Boise, Idaho, as the school's S-1. In 1992, he retired as a Lieutenant Colonel.

Russ married Verda Stanger in Twin Falls on November 1 1951. They had 1 son and 2 daughters, divorcing in 1983. Russ and Verda also raised their granddaughter, Michelle.

In 1954, he was hired by Bennett's Paint and Glass in Twin Falls. In 1961, he was promoted and transferred to Boise by Bennett's, as manager of their glazing office.

In 1981, Russ began his own glazing business, Commercial Glass, Inc, which is still operational.

Russ partnered with Melinda Barnes for nearly 40 years and helped to raise her daughter, Jessica Barnes.

Russ loved his friends and family, traveling, and almost anything with an engine or a motor. He owned a 1965 Ford Mustang Coupe which was much beloved. Russ became especially fond of Disneyland and Disney World roller coasters, and on his 80th birthday, he rode Disney World's Space Mountain and Expedition Everest roller coasters until 2 AM the next morning.

He loved waterskiing, snow skiing, hunting, fireworks, and national parks, especially Yellowstone. He loved the prawns and liver & onions at the Stagecoach Inn. He loved the broiled trout at Red Lobster. He loved IMAX movies. He loved Star Wars and adventure movies especially.

His favorite airplane was the WWII Mustang D fighter, but he loved all airplanes. Russ supported and toured many fine museums. He especially loved the Air & Space Museum, Udvar-Hazy Center.

Russ had a keen intellect and a thirst for learning. History, politics, practical science, and solar energy all interested him greatly. Russ could build almost anything. Even in his later years, he was working on building projects, both commercial and personal. He loved a good massage.

His family and friends valued his steady calm, wisdom, commitment, determination, and integrity.

Preceding him in death were his parents, his grandparents, and his brother, Merlin.

In lieu of flowers, the family request that donations be made in Russ’ name to the following Non Profit 501(c)3 support group:

To send flowers to the family or plant a tree in memory of Russell Johnson, please visit Tribute Store
Thursday
5
March

Share Your Memory of
Russell
Upload Your Memory View All Memories
Be the first to upload a memory!
Share A Memory
Send Flowers