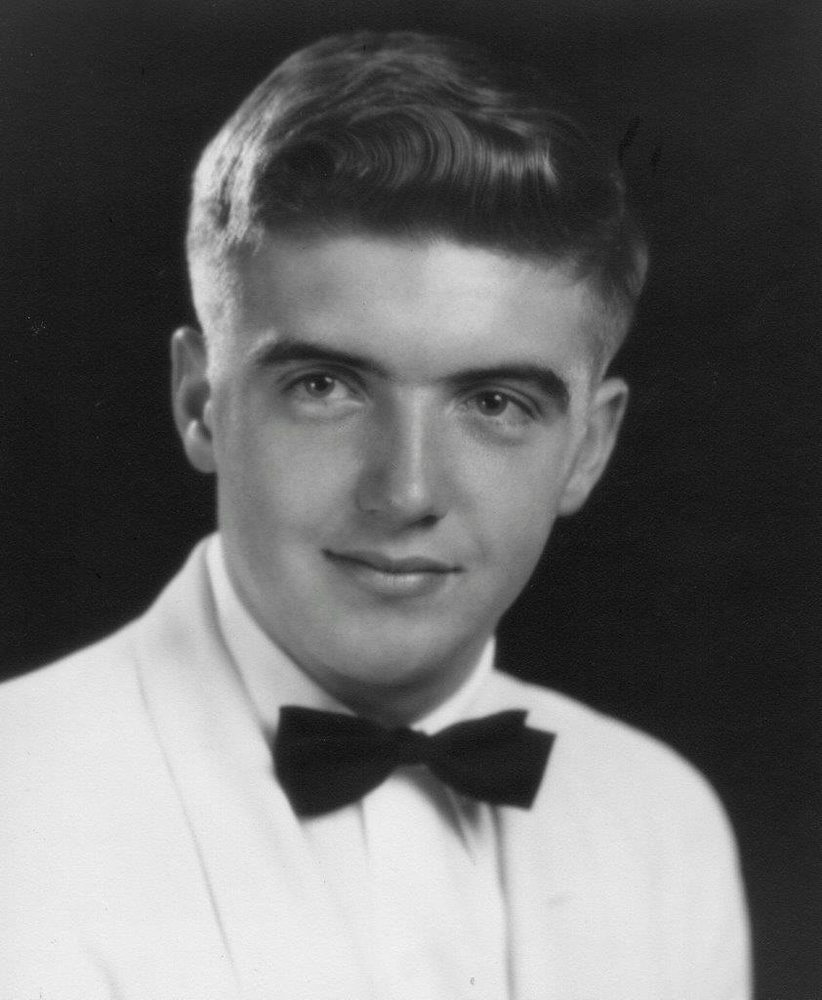 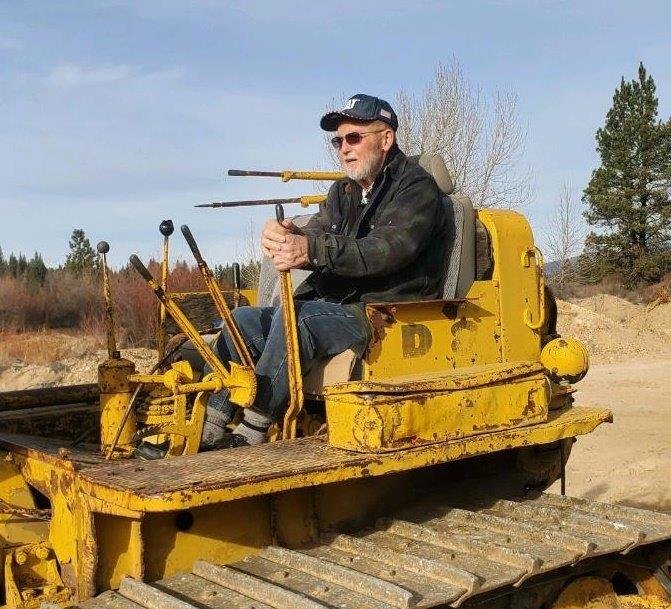 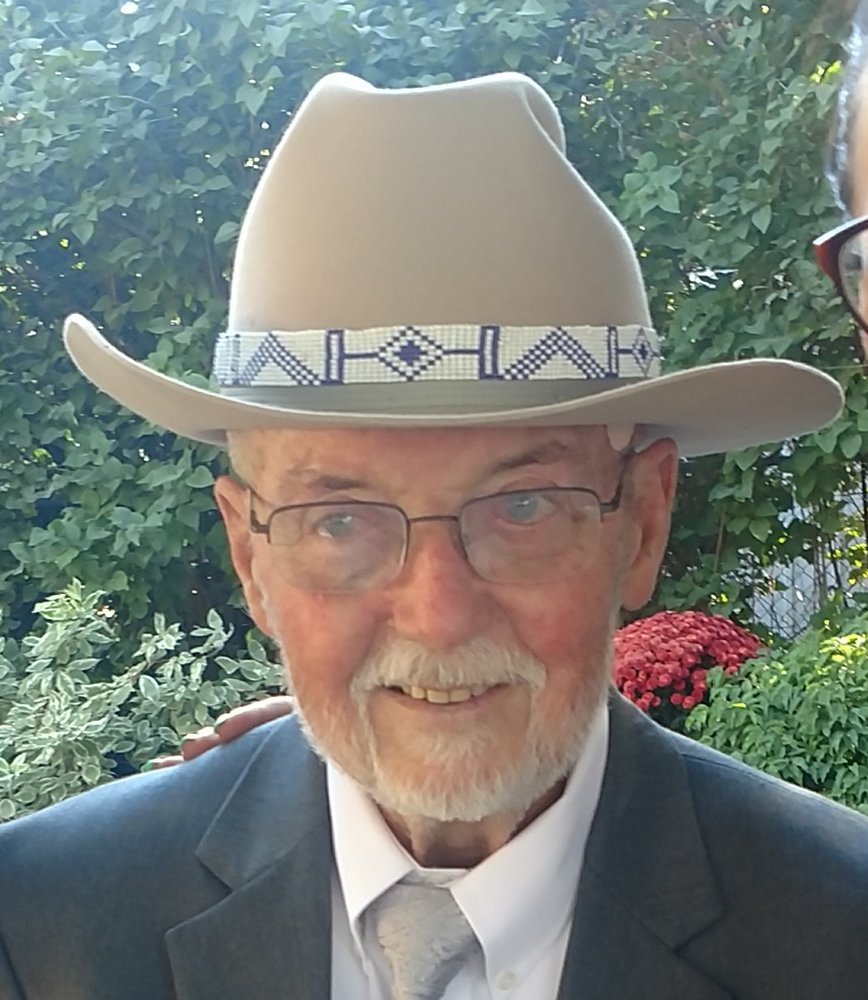 This remark on Oscar’s 2019 Christmas Card accompanied a picture of Oscar Baumhoff driving his old D-8 Cat in October 2019. "They said I'm too old to drive my pickup! Glad they forgot the Cat," he wrote. This was his way of saying good-bye to his friends.  The former Boise County Commissioner, Basin School District School Board Chairman, and 2015 Idaho Tree Farmer of the Year would complete his life where he'd spent most of his 82 years, at home in Centerville on January 6, 2020.

Edward Oscar Baumhoff was born Dec. 21, 1937, in Pocatello, and arrived at the big white house on the hill in Centerville five weeks later as the newly adopted son of Pearl and Fred Baumhoff. Although there were relocations in his early years, home was always Centerville. He loved life at the edge of the forest near Grimes Creek. He felt restored by the quiet slower pace and the informality of life-long friends. Oscar’s 6-B license plates declared where his heart lived, Centerville Idaho.

In 1947, his father purchased a D-8 Caterpillar tractor. Within a few years, Oscar was operating it, and through the years the Cat was integral to his work around Centerville.

Oscar met his future wife, Dorothy Reynolds, at Boise High School. They became a couple immediately, graduating together in 1956 and going on to college at the University of Idaho. They were married in August 1957 and welcomed their first son the following August.  They went on to welcome five more children.  Oscar and Dorothy celebrated their 34th anniversary before Dorothy died in 1991 after a long battle with Breast Cancer.  During her battle with cancer they started Dorothy’s Jelly Business, “Homemade by Dorothy”, and many family members have participated in the operation of the business over the past 35 years. Oscar annually went to North Idaho to pick up 100’s of gallons of frozen huckleberries, it was something he looked forward to every fall.

While Oscar was studying mining engineering at Moscow, the world changed, when his father sold the dredge.   Oscar and his Father came up with a new plan for the Centerville property, cattle ranching. They purchased the Dry Creek Ranch just north of Boise, now Hidden Springs, and a herd of Herford Cattle.  Using the D-8 Cat, Oscar turned rocky dredge tailings into pastures along the streams and brought the herd of cattle to the mountains every summer.  Trailing them for 3 days over Cartwright Toll Road and up Harris Creek to Star Ranch then finally into Centerville.

While his father had served as a State Senator, Oscar chose to serve in other ways. Oscar joined the Idaho National Guard during high school and served seven years. Having attended the one room school at Centerville, he was concerned about local education for his own family and joined the Basin District School Board in the 1960s at a time when the Idaho City school was beginning to grow. Serving 20 years on the board, most of it as chairman, he saw the school increase from three rooms serving 50 students, to 300 students in grades 1-8, and facility expansions to include multipurpose rooms and a library. He took great satisfaction in the fact that funding for the expansion was accomplished through grants, without local tax increases.

In the mid 1970’s, Oscar and Dorothy bought the Idaho World when the weekly newspaper was in danger of going out of business. For the next 10 years, he worked with the staff, often driving around the county himself to make newspaper deliveries.

Oscar was elected to two terms as a Boise County Commissioner. He was part of the board that created a self-funded county insurance program, Idaho Counties Risk Management Program (ICRMP).  He continued as the Boise County Representative on the Board of the Central District Health Department for over 20 years, at this same time he also served on the board of the Children's Home Society of Idaho.

In 1979 Oscar learned of his birth family, Marion and Ted D. Hamilton of Mohler, Idaho, and reunited with his mother and met his brother, Wally Hamilton, which was the beginning of a close relationship between the two brothers. They frequently traveled together, including a 5-week cross-country road trip. Wally eventually moved to Boise in the late 1990’s

In 2002, Oscar helped apply for and received funding to build a Community Center at Centerville.  He then turned his focus to reclamation work on the creeks around Centerville and on forest management practices, planting 6000 trees at Rye Flat on Grimes Creek. In 2015, he was named Idaho Tree Farmer of the year for his work with Timber Management and rehabilitating parts of Grimes Creek for a balanced ecology with input from Trout Unlimited.

Share Your Memory of
Oscar
Upload Your Memory View All Memories
Be the first to upload a memory!
Share A Memory
Send Flowers