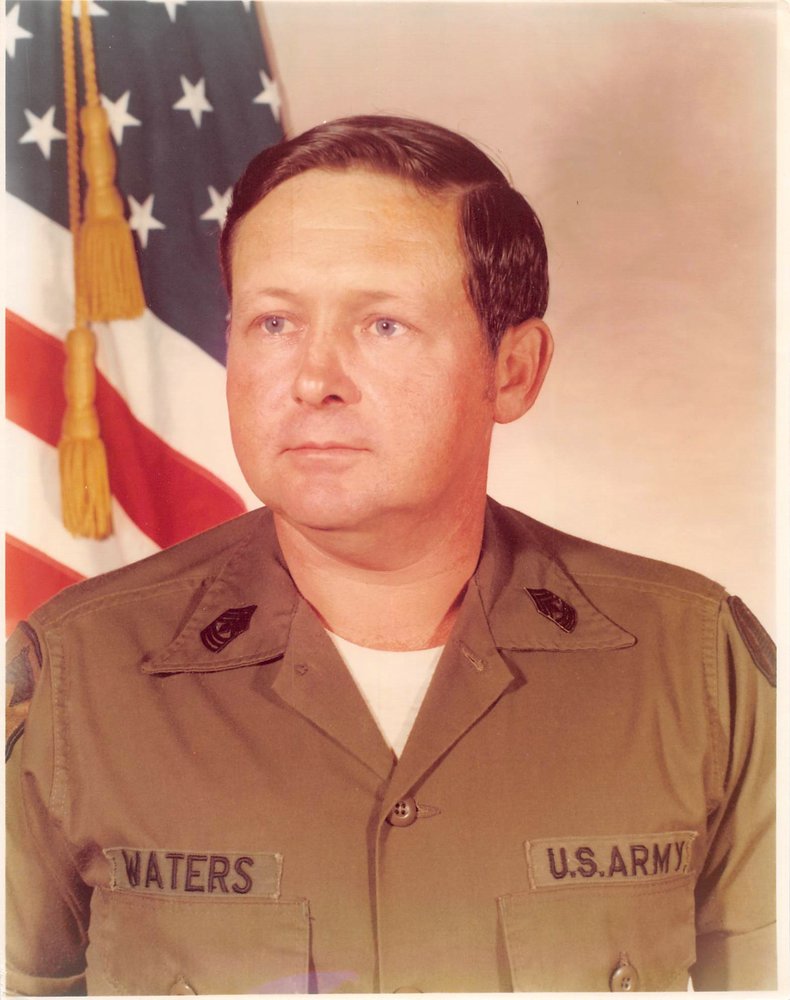 Charles E. Waters, 80, passed away Sunday, December 29, 2019. Born in Mayfield, Kentucky on June 14, 1939, he was destined to be a soldier since he was born on Flag Day and the Army’s birthday.  He served honorably in the U. S. Army from July 1958 to April 1985.  Charles, or Chuck as he was normally called, served at Fort Polk, LA; Fort Leonard Wood, MO; Fort Devens, MA; Germany (three tours), Vietnam, and as an advisor to the Idaho National Guard.

Charles married his high school sweetheart, Geraldine (Geri) Bivin, in April 1959, and together they were blessed with five children, Greg, Mike, Glenn, Debbie and Denise.   Life was interesting as the children grew and we moved about every three years.  Evidently, we were meant to be a band of gypsies, as that is what we looked like as we travelled.  One thing for sure we always looked forward to a new adventure.  Once we moved to the Northwest, that was it, this was home.

Charles’ career in the Army was very interesting.  He was a Combat Engineer.   He was involved in Atomic Demolition Munitions (ADM) for twelve years.  After attaining the rank of Sergeant First Class in 1966, he left the ADM Company to return to a regular Combat Engineer unit.  He served as First Sergeant for several units until being assigned to the Sergeants Major Academy in El Paso, TX.  Upon graduation from the Academy, he was assigned as an advisor to the Idaho Army National Guard. While there he was instrumental in establishing the Idaho Military Academy.  He was promoted to Sergeant Major in April 1978.  He remained in that assignment until retirement in 1985.

With five athletic children, Chuck was always involved with the sports they were in (football, basketball, baseball and softball) either as a coach or spectator.  We didn’t have a calendar in our home, we strictly went from sport to sport.  At one point, Chuck played in two softball leagues; Greg, Mike and Glenn played baseball, football and basketball; and Debbie and Denise played softball and were cheerleaders.  When we were in the States, the excursions also included camping and fishing trips in the summer.  Needless to say, there was never a dull moment in our home.

Chuck even bought a bass boat so he and the boys could go camping and fishing, but soon discovered the little boat was powerful enough to pull someone water skiing.  This made it even exciting for the girls.  Camping trips were fun, but always contained an element of surprise.  We have numerous stories that we laughed about for years about our camping fiascos, from the loss of anchors, fishing rod, reels and tackle boxes and even the sinking of a boat.  Even with all the disasters we encountered, we didn’t stop camping.

Charles was a loving husband, father, grandfather and great-grandfather.  His greatest joy was visiting his children and watching them become parents.   As each of the children married and had children of their own, we finally decided that holidays at Grandpa and Grandma’s had to stop so they could make their own traditions.  Then the fun really began as we house-hopped from Tri-Cities, WA to Boise, ID.

After retirement from the Army, Chuck returned to school to attain a bachelor’s degree in Business Administration.  He then bought a lube/repair business in Orofino, ID.  He enjoyed that for seven years and then taught electronics classes at Lewis-Clark State College.  When he decided to finally fully retire, so did Geri, and they spent the next eight years travelling cross country.  Attending a reunion every year for a group of military retirees became the highlight of the year.  It was such great fun to meet with friends and enjoy the sights of a different city every year.

The family requests that in lieu of flowers if you would like to contribute anything, please send to St. Jude Children’s Hospital or the Disabled American Veterans (DAV).

To send flowers to the family or plant a tree in memory of Charles Waters, please visit Tribute Store
Friday
3
January