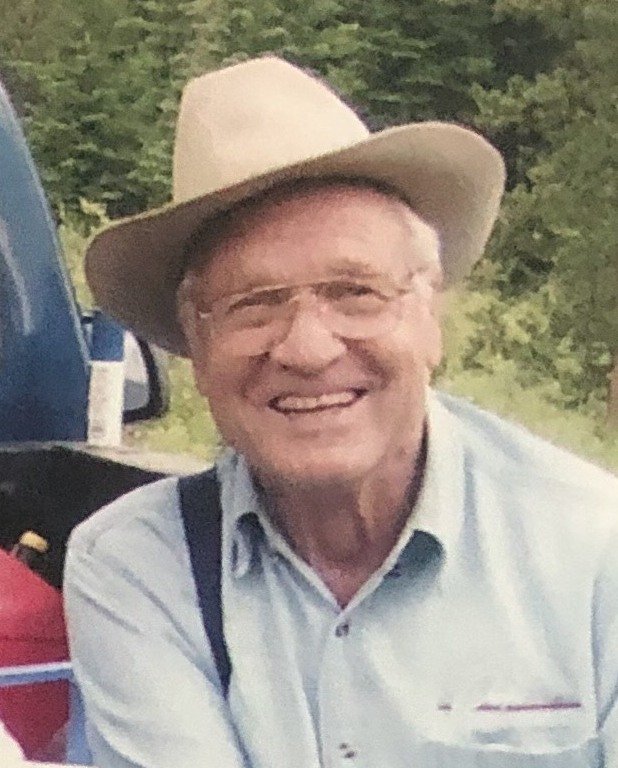 Idaho has lost an old school, real cowboy, and America has lost a true patriot from the Greatest Generation.  Dad passed away on September 22, 2019, the last day of Summer; a beautiful, sunny Sunday morning, and a perfect day to trail the cows in Sawmill Canyon.

Clyde R. Blessinger, beloved husband, father, grandfather, great grandfather, and great-great grandfather, was born on February 15, 1924, in Star, Idaho, to Ralph and Linnie Blessinger.  Clyde’s early childhood was spent in Ola, Meridian, and the Little Lost River Valley.  Clyde and his younger brother, Jim, and sister, Virginia, grew up helping Grandma and Grandpa on the ranch.  They worked hard, but they also managed to have fun, and occasionally got into a little mischief now and again.

After serving in the US Navy during World War II, Clyde married Wyona Walters on October 5, 1947, in Blackfoot, Idaho.  One day, Clyde went to the high school to see his sister, Virginia, who was in the choir room, along with her friend, Wyona.  Upon seeing Clyde through the window of the door, Wyona asked Virginia, “Who was that?”  When Virginia told Wyona that was her brother, Wyona declared, “I have to meet him!”  And the rest, as they say, is history, and they were together for the next 72 years.  They had three children; Ronnie, in 1952, Michael, in 1956, and LaRee in 1966 – the luckiest kids in the world.

Clyde’s early years were spent cattle ranching on the Goldburg.  Later, he worked for the Idaho National Laboratory, retiring in 1981.  He also worked at the State Hospital South in Blackfoot, as well as the Eastern Idaho State Fairgrounds.  Clyde and Wyona moved to Meridian, Idaho, in 1992.

Clyde loved going camping with the family, especially in Sawmill Canyon.  Grandma and Grandpa Blessinger and the family would gather in the Canyon around the Fourth of July every year; a tradition that still happens today.  Clyde also enjoyed hunting and fishing, and spent many happy times with his brother, sons, grandsons, and nephews doing just that.

Clyde was a lifetime member of the Masons, and had recently been presented his 50 year pin.  He served as Worshipful Master of Grove City Lodge #33 in Blackfoot, and twice at the Meridian Lodge #47.

Clyde’s family wants to thank all the wonderful people at Riverview Rehabilitation for taking such great care of him.  A special thank you to Gudrun, Tracy, Eugene, Shan, and Carlynn – your kindness and compassion is an example for us all, and is appreciated more than you know.

To send flowers to the family or plant a tree in memory of Clyde Blessinger, please visit Tribute Store
Monday
30
September

Share Your Memory of
Clyde
Upload Your Memory View All Memories
Be the first to upload a memory!
Share A Memory
Send Flowers