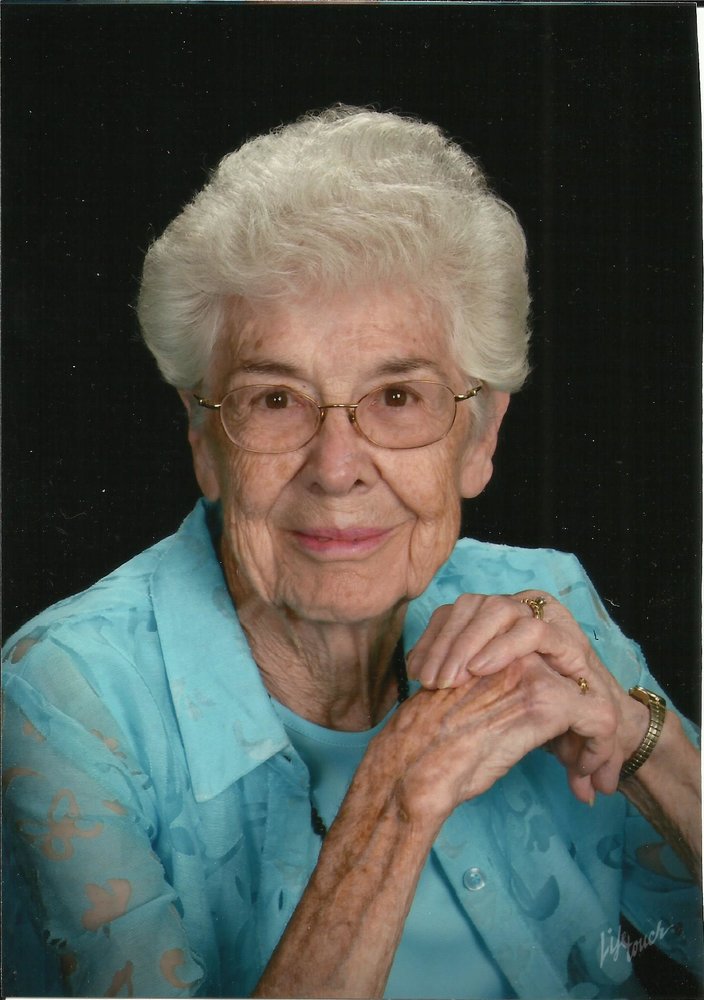 Mary L. Frith peacefully entered eternal life on the morning of May 9, 2019, at Willow Park Assisted Living in Boise, at the glorious age of 96. Mary was born on December 5, 1922, at Eden, Idaho, to Roy M. and Sophia A. Berks Gunning.   She grew up in the Magic Valley, attending schools primarily in Wendell, where she was a high jumper on the girls' track team, and graduated from Wendell High in 1941.  Mary attended Marylhurst College in Portland, graduating in 1945 with a Bachelor's Degree in Home Economics.  On April 9, 1946, Mary married her high school sweetheart, Fred W. Frith, recently discharged from Navy service in WWII.  The newlyweds settled in a home in Wendell, where daughters Connie and Kaye arrived in successive years.  While pregnant with Kaye, Mary contracted polio and spent time in a polio ward in the hospital in Boise, but recovered and successfully delivered her "miracle baby" Kaye.  After moving to Gooding in 1951, Michael, Colleen and Nick joined the family.  Twin Falls became home in 1956, and was the birthplace for Kristy, the youngest.  Mary's Home Economics degree was put to good use maintaining the home and raising six kids, who were treated on birthdays with sponge cakes from her recipe that won blue ribbons at the county fairs.

The family (F Troop) were members of St. Edward's Parish in Twin Falls, where Mary was active in CCW and many church and school activities.  Mary and Fred enjoyed gathering with friends for Study Club and for pinochle parties.  She was also an accomplished seamstress, sewing Easter outfits and other clothes for the girls and making the kids' operetta costumes.  Gardening and taking care of her flowers also occupied her time.  She is especially remembered for the dozens of beautiful  varieties of iris that she nurtured.  Weekends and holidays were often spent visiting family on farms in the Wendell area.

In 1970, with a move to Boise, Mary began her membership at St. Mark's Parish where, among other things, she volunteered at the school library, ushered at Masses, and participated in small faith-sharing and prayer groups.  Mary and Fred also relished friendships with several close neighbors.  Mary moved to Meridian in 2015 to live with daughter Colleen and Mark Grothe, who continued to insure she got to church at St. Mark's even after infirmities necessitated the move to Willow Park in 2017.

Over many decades, Mary and the family especially enjoyed their vacations and reunions at Alturas Lake in the Sawtooths, which Mary first visited at the age of 4.  She also loved their many trips to visit kids and grandkids who had moved to other parts of Idaho and surrounding states, as well as to California to visit family, and to attend Fred's conventions in places like Chicago and Seattle.  Later years were highlighted by a vacation to Hawaii and a Caribbean cruise, courtesy of Kristy and Doug, where Fred and Mary were stars of a "Love and Marriage" game show.

Mary is remembered as one of the sweetest, kindest, gentlest persons anyone ever met.  Her smile was magical and her words warm and loving.  She was an avid reader and often saved news clippings and articles she thought would interest her adult children.

A vigil service will be held at 7:00 p.m. Wednesday, May 15, at Saint Mark's Catholic Church in Boise.  The funeral will also be at St. Mark's at 10:00 a.m. on Thursday, May 16th, followed by a reception.  Interment will follow at 2:00 p.m. at the Idaho State Veterans Cemetery.  Donations in Mary's name may be sent to St. Mark's Catholic Community.

To send flowers to the family of Mary Frith, please visit Tribute Store
Print
Wednesday
15
May