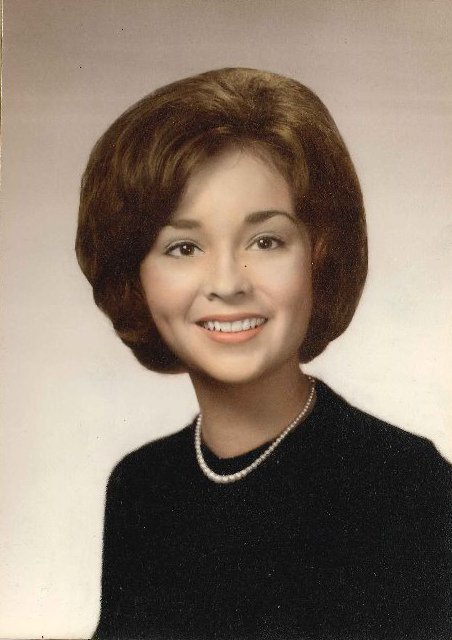 Jeanne Goodenough was an Army brat, as is her surviving husband, Chuck.  She was born Jeanne Marie Taylor in New Orleans to a mother who was half-French and half Spanish; her father was half Choctaw and the other half Scotch/Irish. She went to Elementary and Junior High in New Orleans and Nuremberg, Germany.  Before the ninth grade, her family moved to Texas, where she graduated from Killeen High School in the same class as Chuck.  They met in their sophomore year in Latin II class, but did not begin dating until they were juniors. A student who transferred edged her out of being Valedictorian into her class at the end of her senior year.  Her class voted her “Most Likely to Succeed” in 1967.

She received a scholarship and, as a freshman, attended H. Sophie Newcomb Memorial College for Women (the coordinate college for women at Tulane University in New Orleans). For the rest of her undergraduate education she studied at the University of Texas at Austin where she graduated in 1971 with honors in Philosophy (primarily Logic). Jeanne loved playing the cello, but lamented her small hands.  She worked all through college and was the secretary for Professor Charles Alan Wright at the Law Review for the University of Texas Law School for her last few months in Austin.

At the end of July 1971, she and Chuck were married at his parents’ home in Killeen, Texas. They drove to Idaho on their honeymoon and almost made it to Mackay Bar Resort on the Salmon River driving south from Dixie, Idaho.

She moved back to Germany in the winter of 1972 with Chuck who was on Active Duty with the U.S. Army.  They traveled around Germany and to Paris and London (twice each) and Rome. She taught soldiers math under a program administered by the Big Bend Community College in Walla Walla, Washington. They returned to the U.S.A. in July 1974 when Chuck entered the University Of Idaho College Of Law.

Never idle, Jeanne worked at a local law firm and considered getting a graduate degree in Philosophy in Moscow, but she was not overly impressed with the program; she then decided to go to law school, although a year behind Chuck.  She was on the Moot Court team in her second year and, as an Editor, wrote an article on “Legal Specialization in Idaho” for the Idaho Law Review.  After graduation in 1978, she was a law clerk for Judge (later Justice) Gerald Schroeder in Boise.  She then worked as a Deputy Attorney General and Appeals Bureau Chief at the Idaho Department of Employment.  In June 1979, she gave birth to a son, John Charles; in March of 1984, she had another son, William Taylor, who died in infancy. For a few years, she was the Deputy Attorney for the Idaho Personnel Commission, and then she became the Deputy Attorney General and Division Chief at the Idaho Department of Health and Welfare for the Office of the Attorney General.  In this position for over a decade, she supervised sixteen Deputies and advised both the Director and Board of Health and Welfare.  Before retiring, she was briefly the Deputy A.G. at the Human Rights Commission.

She enjoyed the home we built in 1984.  She loved to cook, even with her husband, and especially with her son, Jack.  Jeanne loved to read, knit, sew, crochet, and particularly quilt. She watched University of Texas football, and a lot of film—primarily older movies and British mysteries.

Outside, she liked to fish, play golf, and camp.  We began rafting in college in Texas on the Pedernales and other rivers.  In Idaho she rafted the Main Salmon (8 times) and the Lower Salmon, the Middle Fork, Hells Canyon, two stretches of the Payette, and the South Fork of the Snake.  We did a portion of the Green River in Utah and the Grande Ronde in Oregon a few times. In 2013, we did two weeks on the Colorado in the Grand Canyon on an outfitted (but not guided) trip.  She was deeply delighted and impressed by the fact that Jack, without a single mishap, did most of the rowing on this, our ultimate trip.

The greatest joys of her life were the marriage of her son to Emily Young of Caldwell, and her 3-year-old granddaughter Michelle Katherine Goodenough.

She is survived by her husband Chuck, her son John, his wife and daughter. Also her mother Sylvia Taylor, sisters Carolyn Taylor and Susan Cole, niece Kristie Cole and nephews Jason and Josh Cole, all of New Orleans.  Her father, Command Sergeant Major Hyrum Taylor and her son William Taylor Goodenough predeceased her.

Funeral Services will be Wednesday, May 1, 2019, 11:30am at Summers Funeral Home, 1205 W. Bannock Street, Boise, ID. Burial will follow at the Idaho State Veterans Cemetery.

To send flowers to the family or plant a tree in memory of Jeanne Goodenough, please visit Tribute Store
Wednesday
1
May