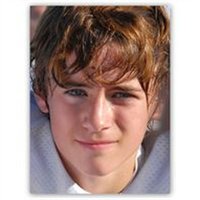 John Anthony Lothrop, 14, of Boise, Idaho, went into the arms of God on Tuesday, June 5, 2012. John was born April 11th, 1998 at St. Luke's hospital to proud parents Joe and Arleen Lothrop, big brother Joey, and siblings Jessica and Ryne. John was an active child who climbed before he walked and loved anything to do with bouncy balls. He was a beautiful child with an infectious smile and an amazing imagination. As a young child he began playing many sports and was blessed to have a dad who loved coaching him. John embodied every aspect of good sportsmanship; positive attitude, competitiveness, dedication, and love of the game. John played t-ball and continued playing baseball for West Boise Little League. John played Y-ball and school basketball. He also played football for the Bishop Kelly Black Knights. His newest and best sport was playing hockey for BK. The Top 10 ESPN moment for John was scoring his first high school goal and having his teammate, brother Joey, embrace him on the ice. If trampoline stunts were an Olympic sport, John would have been a gold medalist. He was a proud member of St. Mark's Parish and most recently graduated from St. Mark's School. He participated in Cub Scouts, community service projects, Altar Serving, and most recently became a Eucharistic Minister when he was confirmed. The Boise Hawks were a second home for the Lothrops. John and Joey spent their summers together working as batboys for the team. Their family hosted players from the Hawks which was the highlight of summer for John and Joey. John was an avid LSU Tiger and Dallas Cowboy fan. He adored his dog Addi, cat Charlie and loved wearing anything camo. John had many amazing trips with his family making wonderful memories. His favorite destination was the Idaho Mountains: camping, chopping wood, building fires, riding motorcycles with the Ruzicka family, and being "grand champion" in cards. John made every day joyful. He loved his family, friends, and classmates. Every life touched by his love was truly blessed. John is survived by his loving parents Joe and Arleen (Daughters) Lothrop, siblings Joey, Jessica, and Ryne, nephew, Aiden and niece, Kaydence, grandmothers; Celeste (Ken) Lucas, Amelia Lothrop, and JoAn Lothrop, grandfather Daryl (Linda) Daughters, great-grandmother Nell Lucas of California, and many loving aunts, uncles, and cousins. He was preceded in death by his grandfather Joseph K. Lothrop and great-grandfather Colonel Anthony D Lucas. A Vigil will be held Monday, June 11, 2012 at 7:00 p.m. at St. Mark's Catholic Church. A funeral mass will be held Tuesday, June 12, 2012 at 11:00 a.m. at St. Mark's Catholic Church. Burial will follow at Dry Creek Cemetery. Services are under the direction of Summers Funeral Homes, Ustick Chapel. Contributions may be made to the John Lothrop Memorial Fund in care of St. Mark's Church, Boise. In the words of Albert Einstein "There are two ways to live your life. One is as though nothing is a miracle. The other is as though everything is a miracle". John lived the miracle.