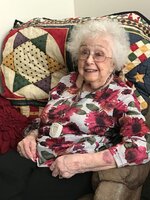 Mother Shirley lived with us moving around to several locations around the western and northwestern USA while our father Errol Jensen took a range of jobs in Air Traffic Control roles and other jobs in various areas such as El Centro CA, airfields in Nevada, a job at Boeing in Renton WA, and even Oregon, and eventually back to the Treasure Valley Idaho area.

Mother Shirley was always so good to us. Born in Caldwell as one of several daughters to Horace F. and Angeline E. Chaney of
Adrian Oregon area, she was raised on the family dairy ranch near the Snake River where she gained many great values and character. Eventually after about 12 years of married life which included a series of job moves to other areas and eventual divorce Mother Shirley returned to Caldwell to settle near family with her kids. She resumed work and very faithfully pressed on through raising kids and a long career at Simplot’s, retiring from Simplot’s with an award.  Mother must have handled and trimmed what must have been literally millions of potatoes for popular restaurants!  She always made it a point to attend and support our school or other events where her children would be involved.  She ensured we did well in school. We often played a variety of board games together, and yes even with a few arguments about the games. She also knew how to bake great fresh bread and cookies!  That bread that was nearly always eaten up right after leaving the oven. Her hobbies included keeping a garden or some flowers around the house and reading. We would attend local rodeos. She loved her children, grandchildren and family very strongly. With her hard work she was able eventually to buy us a new house in Caldwell, all as a single mom! Mother Shirley was always glad to hear from us or see us and did her best to express it.

Momma Shirley worked very diligently through difficult years of being a single mom, asking little for herself. She made sure we stayed connected with family and took us to all family gatherings and some church. She nearly never complained, even though we all knew how she really had "rights to complain" with the hardships that had come her way in life. Most importantly mother did have a true heart of faith in our Savior Jesus Christ and read His words regularly, taking to heart what she read. It is believed Mother’s prayers kept us alive in a few situations where in some very close calls it could have easily been otherwise. With several years at the Streamside Assisted Living center she was affectionately known as “Lady Bug.” She made several great friendships there and was well loved by many. She had a peaceful happy and joyful heart until the end.  She truly cared for people. She also had such a wonderful and unique sense of humor along with a way of making others feel cared about and joyful.  She will be missed terribly by all.

Mother Shirley was preceded in death by sisters Helen, Peggy, and Rosalie Chaney, Bernice Kadel and a brother Dallas Chaney and one-time husband Errol Jensen.  She is survived by a sister Lynn, and brothers David, Jim, and Sam Chaney, and her two children Angela Simpson and Kurt Jensen (in Maryland), along with several grandchildren and several great grandchildren, who loving called her “little grandma.”

Due to current conditions impacting friends, family and loved ones, as well as travel issues for some family members memorial services with Urn placement will be planned at a later date.