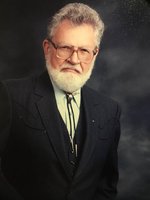 William “Bill” Francis Wade, age 88, passed away on Monday, December 2, 2019 in Boise Idaho.  He was born on February 1, 1931 in Colorado Springs, Colorado and raised by his mother Cleta Marie Dugan Wade and his step father Frank Clay along with his older sister Nadine.  Growing up in the Depression was difficult but his Mother taught him strength in difficult times and his step father taught him the valuable skill of making and repairing almost anything you can think of.  His level of perfection in everything he made could be rivaled by any master craftsman. In his youth, he won a contest for designing a float for the Rose Parade.   He was artistic his entire life by creating and building many items from furniture to the family camper.  When he was in the Navy, he met his wife Mary M England and they raised four children.  He started a television repair company with his step father before joining the Jet Propulsion Laboratory in Pasadena, California where he had a long career helping America in the space race.  Upon retirement, he moved to Grand Junction, Colorado with his second wife Pauline to be near his sister.  After her death, they moved to Boise Idaho.   In his retirement he enjoyed a good game of golf and took up painting again to fill his days.

He is preceded in death by his parents, his sister Nadine Holloway, his wife Mary Wade, his 2nd wife Pauline Garcia Wade and his great-granddaughter Chassidy Clements.  Not to mention his beloved dog Murphy.

He was especially close to his wife Pauline’s eight children and was taken care by her oldest daughter in his final years.  He leaves behind a big legacy and will be missed by his many friends and family.  The family will be spreading his ashes in a private ceremony.