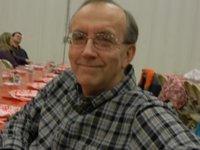 On Sunday, September 22, 2019, Thomas Albert Burton passed away in the University of Utah Hospital at the age of 64.

Tom was born on July 1, 1955 in Rigby, Idaho to Thomas and Elsie Burton. He grew up in Ririe, Idaho and graduated from Ririe High School in 1973.

He received his electronics degree from Eastern Idaho Technical College in Idaho Falls in 1995. For the last 24 years he was a dedicated employee at Micron Technologies in Boise, ID. He truly enjoyed his work there and loved his co-workers.

While he was in Idaho Falls he worked for Phillips 66, Chaffin Oldsmobile, and Firestone.

Tom loved his family and riding his Goldwing with his sweet biker babe Kathy. The two of them loved to take off and be together on the motorcycle with old Rock blaring. He enjoyed scroll sawing, hunting, fishing, camping, and spending time with his family/ward family. Tom also absolutely loved his grandchildren.

He was known for his faith in the LDS Church, sense of humor, infectious laugh, love of old Rock ‘n’ Roll, and his giving heart. He was always willing to help anyone that ever needed it.

Tom was preceded in death by his father, Thomas; mother, Elsie; sister, Alta and his sister Judy. He is survived by his wife Kathy; his two children, Jenny and Heather; his ten grandchildren, one great-granddaughter; sister, Marlene (Ronnie Borchert); and numerous nieces and nephews.

A special thank you to Saint Alphonsus ICU and University of Utah CVICU.

Thank you to all family and ward family, friends, co-workers, and acquaintances, for the many weeks of words of encouragement, prayers, and supporting our mom while he’s been in Utah.