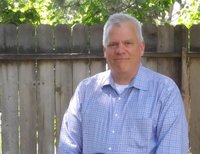 On May 28, 2019, David Blackwell passed away peacefully at home shortly after sharing farewells with his wife, Dottie, and son, Sean. Born on New Year’s Day 1960 in Chelsea, MA, David grew up in the Boston area and attended UMass-Boston, where he earned a degree in political science. After college, David moved away from Boston with Sean and found his way to Boise, ID, where he met Dottie while working at the Idaho State Library. David and Dottie married on August 6, 1995, and enjoyed 24 years of love, marriage, and partnership. After working in postal services, David taught himself information technology and eventually settled into a position with Trinity Health at Saint Alphonsus-Boise, where he served as a well-respected colleague and IT professional. In addition to a flowering personal and professional life, David’s spiritual life grew after he moved to Idaho. St. Paul Baptist Church awakened a new faith in David and led him to baptism and eventual ordination as an Associate Minister. David pursued his newfound love of God and his desire to serve by attending Northwest Nazarene University and earning dual Master of Ministry and Master of Arts – Pastoral Ministries degrees; he applied these degrees by starting two churches, The Fountain and The Spark, where he worked tirelessly to explore modern Christian faith and to serve his community. David also nursed deep passions for music and philosophy, both of which he passed on to Sean. David is survived by his wife, Dottie; his son, Sean and his family; Yvette Silva and her family; his sisters, Jeanne Blackwell and Judy Osborne and their families; his mother-in-law, Jean Douglas, his brother-in-law, Dr. Jim Browning; his brother-in-law and sister-in-law, Jon and Jennifer Sowers; his brother-in-law and sister-in-law, Jason and Sue Hill; and too many friends, associates, and relations to name. A memorial service for David will take place at Summers Funeral Home at 3629 East Ustick Road, Meridian, ID  83646 on Saturday, June 8, at 11:00 am. Instead of flowers, please consider making a donation in David’s name to one of his favorite charities: Calvary Christian Academy in Emmett or The Mars Generation. Here are the links so that you may do that.   https://www.ccaemmett.com  and https://www.themarsgeneration.org.