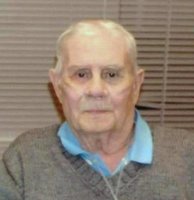 Allen met Alice Hatfield on a blind date set up by his sister-in law, they married on Oct.13, 1973. They added two children to their family, Angela and Adam.